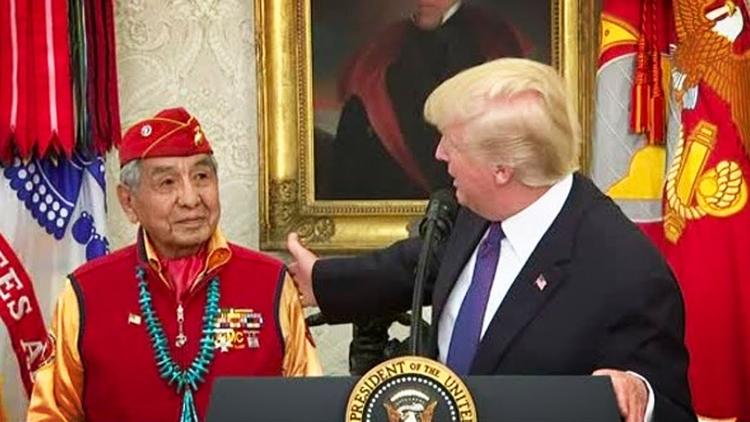 “(Trump should) stop using our historical people of significance as a racial slur against one of his opponents,” a Native American advocate said.

President Donald Trump has provoked the ire of Native Americans once again by using a meeting meant to honor Native World War Two veterans as an occasion to joke that there is a “Pocahontas” in the U.S. Congress, an apparent slur against Democratic Senator Elizabeth Warren of Massachusetts.

After listening to one veteran speak at length about his experience as a “Navajo code talker” during the war, Trump heaped praise on the veterans and said he would not give prepared remarks himself.

“You were here long before any of us were here,” Trump said. “Although we have a representative in Congress who they say was here a long time ago. They call her Pocahontas.”

As Trump spoke, the veterans stared at him silently in a manner suggesting bemusement. The “joke” had clearly fallen flat, causing the U.S. leader to place his hand on the shoulder of one of the veterans and say: “But you know what – I like you.”

To add insult to injury, the ceremony took place before a portrait of a glaring President Andrew Jackson, who was a fervent advocate and executor of genocidal policies toward the Native peoples of the United States.

During his presidential campaign, Trump repeatedly mocked Warren as “Pocahontas” in reference to past claims by the representative that she had Native American ancestry.

“Pocahontas” was the name of a famous 17th-century Native American young woman who was the daughter of Powhatan chief Wahunsenaca. As a teenager, Pocahontas’ husband was murdered and she was kidnapped by the English colonizers and subjected to repeated acts of sexual violence and rape. At the time, Native women were sexually targeted en masse by English colonists.

However, Pocahontas is most well-known for her cartoon portrayal in the eponymous 1995 animated Disney film, where she is portrayed as a buxom and sexually-mature woman who dances with raccoons and falls in love with colonizer John Smith, who is portrayed in a manner similar to Snow White’s “Prince Charming” but was known historically as a dishonorable mercenary and violent privateer.

Warren, one of the Senate’s most prominent liberal Democrats, is a legal scholar and was an adviser to former President Barack Obama before she was elected to the Senate in 2012.

“The reference is using a historic American Indian figure as a derogatory insult and that’s insulting to all American Indians,” Alliance of Colonial Era Tribes general-secretary John Norwood said, according to NBC.

“(Trump should) stop using our historical people of significance as a racial slur against one of his opponents.”