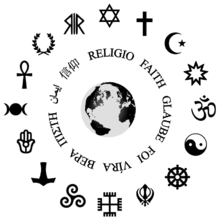 It’s a common question that arises when discussing religion, politics and world crises, particularly apparent terrorist attacks of the type that played out in New York City on Tuesday.

Islam in particular is branded as a violent faith, but others argue Christianity deserves the same assessment.

But behind the question is a whole host of problems, and so it isn’t surprising some scholars suggest that classifying any religion as violent is problematic and unreliable.

As a scholar of religion, I also question whether calling oneself “religious” really says anything meaningful about one’s identity. Given the diversity of religious groups, the term “religion” is not only extremely general, but it has a long history.

Learning about the origins of the word can help us understand better the myriad social groups that come together around shared histories, texts, traditions and experiences.

According to the scholarly work of theologian Daniel Boyarin and historian Carlin Barton, in ancient Rome the term “religion” was not at all separate from everyday experiences such as “eating, sleeping, defecating, having sexual intercourse, making revolts and wars, cursing, blessing, exalting, degrading, judging, punishing, buying, selling, raiding, revolting, building bridges, collecting rents and taxes.”

Religion alone does not explain violence

Today, the term “religion” gets separated from political, social, economic and cultural life. And so if we’re pondering whether religion is inherently violent, then we’re probably interested in why an individual or group acts violently. So is religion really something we can compartmentalize and blame for the violent actions of individuals or groups?

Not at all, argues William Cavanaugh in his 2009 book The Myth of Religious Violence. While society often makes clear distinctions between religion and secularity, Cavanaugh argues religion is a poor category to use when trying to understand why individuals or groups act violently.

By Cavanaugh’s reasoning, a more contemporary example would be the recent mass shooting in Las Vegas. Stephen Paddock, who shot from the 32nd floor of a hotel to kill 58 people, had no apparent religious affiliation. Neither did many other perpetrators of mass shootings, among the most violent and horrifying crimes committed in the United States, including the murderer who gunned down 20 young schoolchildren in Newtown, Conn., in 2012.

So instead of asking “was religion the reason that a group or individual acted violently?” Cavanaugh suggests it’s impossible to separate religion from culture, politics and economics — making the question incoherent.

For those inclined to believe religious groups are more violent than their secular counterparts, Cavanaugh challenges that notion by pointing out secular institutions often commit violence, but avoid moral scrutiny because they present themselves as reasonable and not driven by religious fervour.

Cavanaugh’s argument is not that religious groups aren’t violent. Instead, he argues religion is not what determines whether a group is violent. He holds that there are so many motivating factors that result in violent behaviour that it’s impossible to determine whether religion plays a primary role.

Violence is something demonstrably found in groups and individuals regardless of whether they’re religious or secular.

Many groups that have opposed violence seem to be both secular and religious at the same time. Consider the pacifism of Mohandas K. Gandhi and of Martin Luther King, Jr. during the Civil Rights Movement. Perhaps non-violence also exceeds the divisions between the religious and the secular.

Instead of talking about “religious violence,” it’s time to start talking about violence in general and determining what spurs people to violent acts. Otherwise we risk ignoring the deeper and more meaningful reasons why people commit horrifying acts of violence against others.