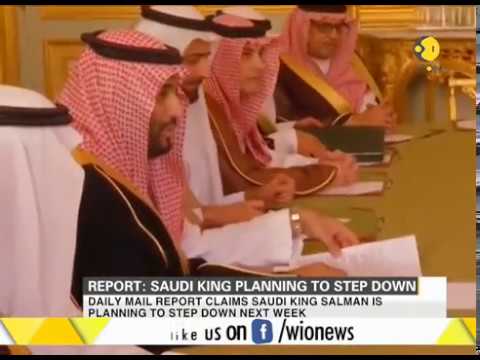 Speculation has mounted that the King of Saudi Arabia, Salman bin Abdulaziz, will step down and pass the throne to Crown Prince Mohammed bin Salman next week.

The United Kingdom’s Daily Mail quoted a source “close to the royal family” by saying that the 81-year-old King Salman plans to abdicate and hand power over to his son, Crown Prince Mohammad bin Salman, that has recently taken a de facto leadership role in Saudi Arabia.

The source claims that Salman plans to “continue only as a ceremonial figurehead” while “handing over official leadership of the country to his son.”

His son, Crown Prince Mohammed bin Salman, commonly referred to as “MBS”, already holds key positions within the government and has promised to usher in sweeping changes such as granting more rights to women and returning to a “moderate Islam.”

The source continued to the Daily Mail: “Unless something dramatic happens, King Salman will announce the appointment of MBS as King of Saudi Arabia next week. King Salman will play the role of the queen of England. He will only keep the title ‘Custodian of the Holy Shrines.’”

According to reports, this comes as a reaction to recent events in the Middle East between Saudi Arabia and Iran, and recent turmoil in Lebanon.

“MBS is convinced that he has to hit Iran and Hezbollah,” the Daily Mail source said.

“MBS’s plan is to start the fire in Lebanon, but he’s hoping to count on Israeli military backing. He has already promised Israel billions of dollars in direct financial aid if they agree.”

Analysts have suggested that Israel is not willing to engage in a costly war in Lebanon against Hezbollah, especially at the behest of Saudi Arabia.

The report by the Daily Mail hinted that King Salman may be suffering from dementia, which would explain a swift exchange in power while attempting to save face by keeping quiet on the matter.

These statements are unconfirmed and have not been corroborated by Saudi officials.

WION: “Report: Saudi King is planning to step down”