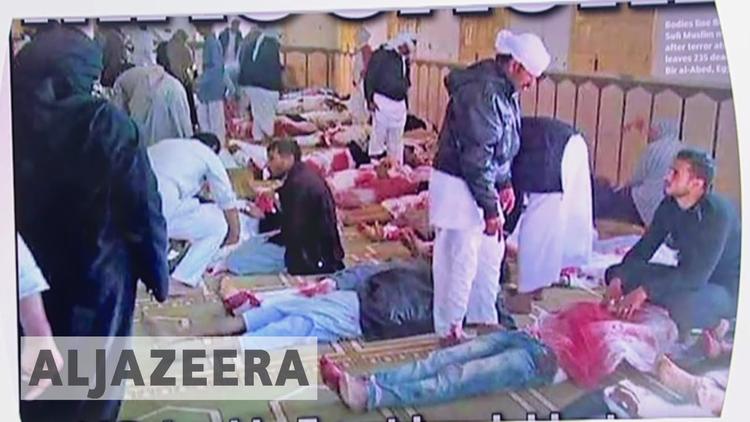 As the death toll in this weekend’s horrific terrorist attack on a Sufi mosque near El Arish in Egypt’s Sinai Peninsula rose to at least 305, the patriarch of the Coptic Church, Tawadros II, affirmed the solidarity of Egypt’s some 8 million Christians with the Muslim victims and their families. He called those killed by extremists “martyrs.” He added, “This terrorism that strikes boldly and cruelly is devoid of all human values and principles, for the purpose of which God created human beings. It is devoid of all those principles by which Egypt has all along lived in love and harmony.” He said that Egypt will prevail by virtue of its unity and confidence in God and joint action.

So that’s what a wise Christian had to say about the horrific murder of hundreds.

Over here, our Mr. Trump used the incident cynically to promote his own warped agenda:

Will be calling the President of Egypt in a short while to discuss the tragic terrorist attack, with so much loss of life. We have to get TOUGHER AND SMARTER than ever before, and we will. Need the WALL, need the BAN! God bless the people of Egypt.

Trump did not talk like this when a white guy shot dead 58 people and wounded 546 in Las Vegas.

When the memes “terrorism” and “Muslim” coincide, Trump’s mind goes to the Wall and to his meretricious visa ban on Muslim entrants into the United States.

US Rep. Filemon Vela (D-TX) reacted to Trump’s tweet: “What an idiot!”

But the perpetrators of this attack are likely Egyptian nationals of Bedouin background in the Sinai Peninsula who have come under the influence of an extreme form of Saudi Wahhabism.

Trump’s visa ban did not extend to Egyptians, and therefore in principle those who planned the attack on the Haririya Ahmadiya mosque in Rawda near El Arish could land by plane in the US at any moment. That isn’t an argument for expanding the visa ban, but for its impracticality as a tool of counter-terrorism. For instance, no Syrian refugee has been convicted of terrorism on US soil.

But beyond the incoherence of the comment lies a heart of stone. Trump’s response to Egypt is that we should keep people of Muslim heritage out of the US? That is supposed to make Egyptians feel better (they are about 90% Muslim)? His response is to put the bombing in the frame of an immigrant tragedy.