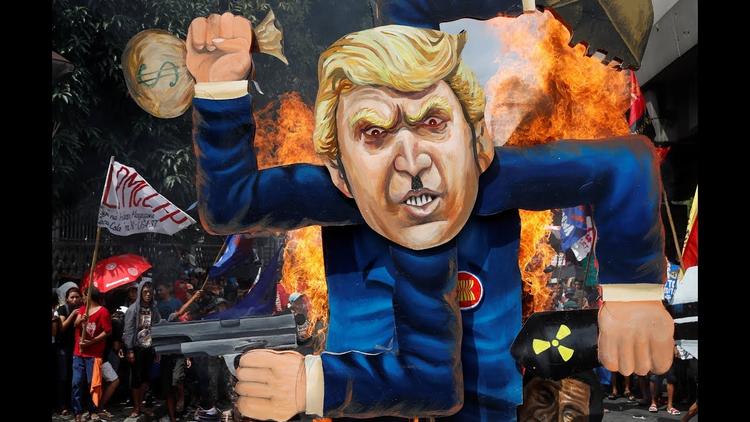 Fresh off an Asia trip where he showed surprising deference to dictators, Trump looks ready to start a renewed assault on critics at home.

As a candidate, Donald Trump rallied voters against a variety of enemies. He vilified Mexicans. He stereotyped Muslims. And he went after the Chinese for “raping” the United States.

President Trump still wants to build that wall along the border with Mexico. He’s still trying to keep out Muslim immigrants.

As for China, all signs have pointed to more conflict.

The trade gap between the United States and China during the first nine months of Trump’s term is even larger than it was before he took office: $273 billion at the end of September in favor of China compared to $257 billion a year ago at the same time.

Chinese leader Xi Jinping finished up a Communist Party congress in October with a nearly four-hour speech that stressed his country’s great power status and his plan to boost military preparedness. Although Beijing has pledged to help reel back North Korea’s nuclear program — and supported sanctions toward that end — Pyongyang has shown no sign of budging from its position. And China recently negotiated a deal with South Korea that scrapped its economic pressure tactics in exchange for Seoul scaling back on its participation in U.S. plans for regional missile defense.

Indeed, on the eve of Trump’s recent 12-day trip to Asia, pundits were predicting a strong anti-China swerve in administration policy.

But touching down in Beijing, Donald Trump was all smiles when he met with Xi Jinping. His arrival was greeted with all the pomp of a visiting king. And the American president reciprocated by speaking of a special economic relationship with China.

Actually Trump went much further. He was positively 18th century in the way he took a knee in Beijing (I’m talking kowtow, not Colin Kaepernick). Writes Adam Taylor in The Washington Post:

Trump was bizarrely deferential to President Xi Jinping, with the American president lavishing personal — and unreciprocated — praise upon his counterpart. It was a remarkable approach for a president who has so frequently talked tough on China, as well as a contrast to Trump’s condescending treatment of [Japanese Prime Minister Shinzo] Abe, the ally whom Trump belittled a number of times during his time in Japan.

Trump’s performance in Beijing went beyond even the man-crush he seems to develop with any autocrat who exercises the free rein of power that the president so desperately craves.

Instead of pretending that China had not gotten the best of the trade deal with the United States, Trump decided to compliment his hosts for outfoxing his predecessors. China, in other words, was not to blame for working hard to make China great again at America’s expense. “I give China great credit,” Trump said. The blame, instead, fell squarely on past presidents.

The implication: Only Trump works on behalf of America’s interests. All other American leaders are dupes — or, worse, traitors.

As Trump toured Asia over the last two weeks, he put on a show of alpha male behavior not seen in an American president since Mr. Bully Pulpit himself, Teddy Roosevelt.

In Japan, for instance, Trump treated the deferential Shinzo Abe as a servant of American power. He made sure to emphasize that Japan would always be number two, a reality that previous American leaders have always taken pains to obscure. Writes David Nakamura in The Washington Post,

“The Japanese people are thriving, your cities are vibrant, and you’ve built one of the world’s most powerful economies,” Trump said, before looking up from his prepared remarks. Turning his head to face Abe next to him, Trump ad-libbed: “I don’t know if it’s as good as ours. I think not, okay?” He emphasized the “okay” by drawing it out leadingly as a parent might with a child.

It would have been instructive to put Trump on an Amtrak train and then on the Washington metro before whisking him over to Japan to ride a Shinkansen high-speed train and then the Tokyo metro. Then perhaps he wouldn’t have been so condescending about Japan’s “second-class” economy. (On my trip to Japan last month, I took the Shinkansen between Fukuoka and Kyoto, a 400-mile trip that took a little less than three hours. That’s the equivalent of the distance between DC and Boston, which can take two to three times as long on Amtrak — and the trains run as frequently as the DC metro on the weekend.)

In the Philippines, Trump made no effort to diminish President Rodrigo Duterte. Maybe that’s because Duterte has boasted of the ultimate alpha male activity — personally killing people. Duterte also stands accused of ordering the murder of a journalist (take that, fake news). And the Philippine leader has disparaged former President Obama in even more graphic terms than Trump has himself.

Trump almost seemed a little cowed before Duterte, like a capo before the boss. If Trump raised any human rights concerns about Duterte’s record of extrajudicial killings, as his press spokesperson claimed, he did it so briefly and quietly that it never even registered with the Philippine president.

In Vietnam, because he wanted something, Trump did more wheedling than posturing. As elsewhere, the president tried to get foreign leaders to agree to buy U.S. weapons. But in Hanoi, he revealed his desperation. He told people in the room that he needed quick wins because he would soon be running for office again. Trump didn’t need to say that his standing in the polls is the lowest ever of any president in their first year.

But it was with Russian President Vladimir Putin that Trump really crouched down and waited for his ears to be scratched. Back home, the Russiagate investigations are heating up. Putin, however, denied any interference in the U.S. elections. That was good enough for Trump. “Every time he sees me he says, ‘I didn’t do that,’ and I really believe that when he tells me that, he means it,” Trump told reporters.

Former CIA director John Brennan and former director of national intelligence James Clapper, whom Trump has derided as “political hacks,” both expressed outrage that Trump would take the word of Putin over the analysis of U.S. intelligence agencies.

From Tokyo to Beijing, Trump excelled at punching down and toadying up. He is America’s number one alpha male, beating his chest and roaring — except when he encounters another male more alpha than he is. Welcome to the World Wrestling Federation version of international relations.

On this Asian road trip, Trump also revealed his own one-track mind.

On Trump’s watch, multilateralism has died, strangled that first week in office when the new president withdrew from the Trans Pacific Partnership. Pointedly, on the sidelines of the same APEC meeting that Trump attended, the remaining signatories declared that the agreement will rise from the ashes without U.S. participation. Although his trip was extended so that he could attend the East Asia Summit, Trump decided to bow out early. It was an important symbol that Trump doesn’t play with groups. He’s a one-on-one kind of guy. He just doesn’t have the bandwidth to handle more than that.

China traditionally favored bilateral relations over multilateral ones because it could use its size to advantage in negotiating better deals with smaller Asian countries. But now the United States and China have traded places. Trump is suspicious of any grouping larger than two (a boxing ring can’t accommodate more than that). And China has seized the opportunity to present itself as the country that cares about the world and not just what it can gain in any set of bilateral negotiations.

Trump’s flip-flop on China doesn’t mean that he’s gone soft on America’s adversaries. In his UN speech, Trump singled out four countries for censure — Iran, Syria, Venezuela, and North Korea. Other countries have also fallen into that category as well. Trump has tried to dictate to Mexico how it should spend its money. He approved of Saudi Arabia’s embargo of Qatar and its war in Yemen. He routinely uses drones to intervene in the affairs of other countries such as Pakistan and Somalia.

But what Trump said to Xi Jinping was quite extraordinary. He recognized that a previously “bad” country was simply acting in its own interests and extracting the best deal it could from the United States. The bottom line: Trump needs China. What he doesn’t need, however, are all his domestic adversaries, beginning with Barack Obama. Trump knows that he can rouse his base more effectively by going after the enemy within than the enemy abroad.

In this way, the president is beginning to shift the narrative. In coming months leading up to the mid-term elections, Trump will sharpen his criticism of liberal judges, an ineffectual Congress, and traitorous members of America’s civil society (ACLU, Sierra Club, etc.).

It’s not that the world is arrayed against Donald Trump. As he has pointed out repeatedly, he gets along with everybody, even Angela Merkel.

No, the problem isn’t them. It’s us — anyone who dares to oppose the president’s brazen attempt to shift all wealth to the wealthy and all power into his own grasping hands. That’s why the Trump administration is conducting its purge of federal institutions. That’s why Trump blasts the media and Hollywood. Even Republicans who dare to resist, including outright conservatives like John McCain and Bob Corker, have been raked over the coals.

An alpha male needs a whole mess of betas to reinforce his status. Now that he’s back from his imaginary victory lap in Asia, Trump is preparing to go after the so-called traitors on the home front. In 1934, Germany endured its Night of Long Knives when the Nazis purged their own ranks along with establishment conservatives and anti-Nazis.

Brace yourself for three more years of long knives.

The Star Online: “Trump’s effigy set on fire in protests against his Philippines visit”