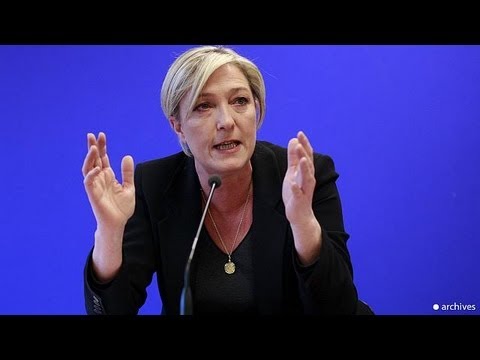 Circulating “violent messages that incite terrorism or pornography or seriously harm human dignity” is a crime punishable in France by up to three years’ imprisonment.

The decision was taken by a cross-party committee in charge of the internal functioning of the assembly, after French authorities lodged a request to lift Le Pen’s parliamentary immunity over a crime that carries up to three years in prison and a fine of US$87,000.

The leader of the National Front (FN), who ran a failed bid for president this year, tweeted three pictures of IS violence in 2015.

One image showed the body of James Foley, an American journalist beheaded by the Sunni extremists. Others showed a man wearing an orange jumpsuit being run over by a tank, and another man being burned alive in a cage.

“Daesh is this!” Le Pen wrote in a caption, using an Arabic acronym for IS. The tweets followed an interview earlier that day with political analyst and IS expert Gilles Kepel on BFM TV, who argued that the rise of the IS group and the FN among French voters were directly linked.

Following a request from Foley’s family, Le Pen eventually deleted the image of the U.S. citizen, saying she had been unaware of his identity.

In September, parliament also lifted the immunity of another FN MP, Gilbert Collard, over similar tweets containing IS images.

Le Pen, a trained lawyer, decried the move as a “lowly, purely political decision” which violated her freedom of expression. “It’s better to be a jihadist returning from Syria than an MP condemning the ignominies of IS,” she told AFP, suggesting that France was softer on IS members than its own domestic opponents.

The authorities began investigating the tweets in December 2015, but could not press charges while Le Pen was protected from prosecution. At the time, she was a member of the European Parliament.

The EU Assembly voted in March to lift Le Pen’s immunity, but three months later it was reinstated when she was elected to the French parliament for the first time.

The decision of the 22-member Assembly committee made on Wednesday is the latest blow to the 49-year-old politician, who has appeared adrift since her defeat at the hands of Emmanuel Macron in May’s presidential run-off.

Le Pen lost to Macron with a lower-than-expected 33.9 percent to his 66.1 percent of the vote after floundering badly in a final TV debate. The FN also fared poorly in June’s parliamentary elections, taking just eight seats out of 577.

Tensions between rival party factions — one led by anti-immigration hardliners, the other by anti-EU nationalists — erupted in September with the resignation of Le Pen’s right-hand man, Florian Philippot. Philippot was the architect of Le Pen’s strategy to rebrand the FN as less racist and more politically correct than in the past.

This is not the first time Le Pen’s immunity has been lifted: in 2013 she compared Muslims praying in Paris streets over a lack of mosques in the capital with the German military occupation during the Second World War. In June of this year, she was accused of slandering conservative lawmaker Christian Estrosi.