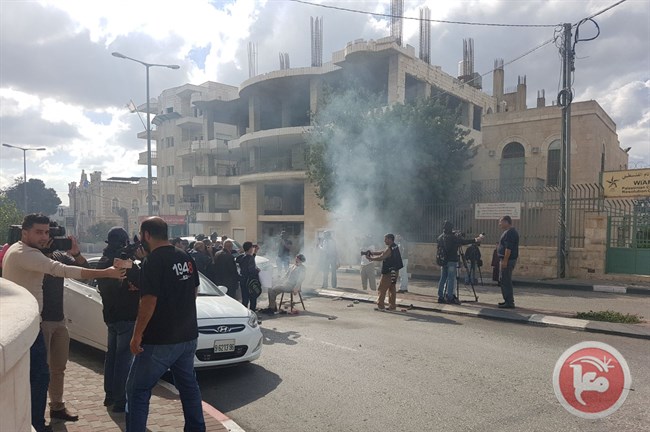 BETHLEHEM (Ma’an) — Clashes erupted between Palestinians and Israeli forces in Bethlehem city on Wednesday following a march commemorating the 100th anniversary of the Balfour Declaration, the 1917 document which supported establishing a Jewish state on what would become British Mandate Palestine, and paved the what for the to the establishment of Israel.

Palestinian protesters marched from the southern to northern ends of the city, until they reached Israel’s separation wall. Protesters set up an effigy of Arthur Balfour, the author of the declaration, beating and throwing shoes at the figure while burning a copy of the declaration. 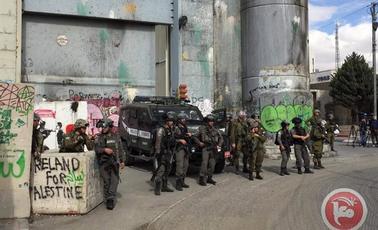 Palestinians have viewed the declaration as paving the way for the creation of the state of Israel at the expense of the land’s original inhabitants. 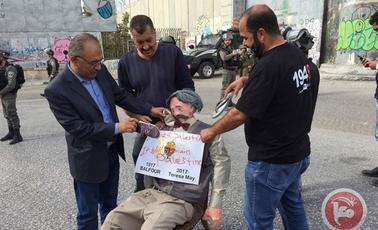 The declaration was made before the British had wrested control of Palestine from the Ottoman Empire, and was not made public until several years after the World War I, in 1920.

By that time, Britain had been formally granted a mandate over Palestine by the League of Nations, and was struggling with its contradictory obligations of “rewarding” Arabs for their support during the war, while also fulfilling their pledge to create a Jewish state.

After World War II, British forces withdrew from Palestine, leaving it in the hands of the newly created United Nations, which favored partition, particularly as evidence slowly emerged of the vast scale of the Holocaust in Europe. 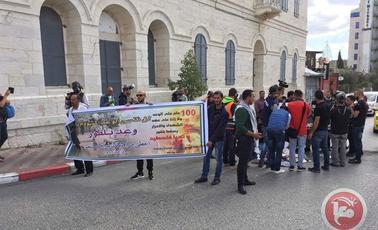 The decision led to the 1948 war between Arab nations, including Palestinians, and Jewish immigrants, ultimately resulting in the creation of the state of Israel and the expulsion of more than 700,000 Palestinians from their homes inside its borders, an event known as the Nakba among Palestinians.