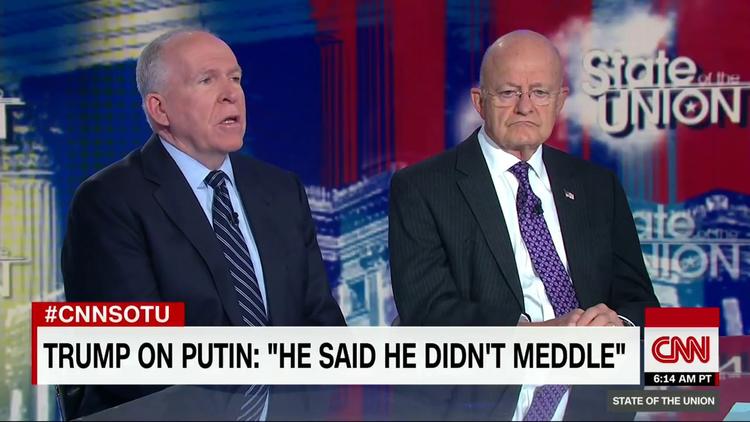 Jake Tapper asked former CIA head John Brennan about Trump’s statement on Friday that he believed Russian President Vladimir Putin when he said that Russia did not interfere in the 2016 election, and dissed intelligence and law enforcement professionals such as James Comey and James Clapper as “hacks.”

“JOHN BRENNAN, FORMER CIA DIRECTOR: Well, I think Mr. Trump knows that the intelligence agencies, specifically CIA, NSA and FBI, the ones that really have responsibility for counterintelligence and looking at what Russia does, it’s very clear that the Russians interfered in the election.

And it’s still puzzling as to why Mr. Trump does not acknowledge that and embrace it, and also push back hard against Mr. Putin.

The Russian threat to our democracy and our democratic foundations is real. And I think his continuing to not say very clearly and strongly that this is a national security problem, and to say to Mr. Putin, we know you did it, you would have to stop it, because there are going to be consequences if you don’t.”

Then Tapper asked further about Trump’s amazing deference to Putin (since Trump defers to no one else), noting that Trump spoke of Putin as insulted by the allegation that he put his thumb on the till of the US election.

BRENNAN: Well, I think Mr. Putin is very clever in terms of playing to Mr. Trump’s interest in being flattered.

And, also, I think Mr. Trump is, for whatever reason, either intimidated by Mr. Putin, afraid of what he could do or what might come out as a result of these investigations.

So, it’s very worrisome. And I think it sends a worrisome, very disturbing signal to our allies and partners who are concerned about Russian interference in their democratic processes as well.

So, it’s either naivete, ignorance or fear, in terms of what Mr. Trump is doing vis-a-vis the Russians.

Let us parse Brennan’s reply. He begins by saying that Trump is easily manipulated through stroking of his ego.

I’d just like to point out that you would never, ever want a president who is easily manipulated by foreign leaders.

But then Brennan went further. A second possibility is that Trump is intimidated by Putin.

That diction would suggest that Trump is a coward and lowers his eyes in acquiescence when Putin stares at him with that cold blue KGB gaze.

I’d just like to point out that you would never, ever want a president who
can be easily cowed.

And then Brennan did it. He actually came out with it. The third possibility is that Trump is afraid of what Putin might do if the investigation continues, or what might come out as a result of it.

The former director of the Central Intelligence Agency openly alleged the real possibility that the sitting president of the United States is being successfully blackmailed and that policy is being made as a result of Trump’s fear of exposure.

Brennan was clear that he has no proof that Trump is compromised.

But Brennan would not make this allegation unless he had at least circumstantial evidence of “kompromat” or compromising materials in the hands of Putin, of the release of which Trump is deeply afraid.

I’d just like to point out that you would never, ever want a president who is being actively blackmailed by a foreign power.

Trump is, however, deeply worried about Putin’s feelings. And he trusts Putin more than he trusts his own security officials.

Brennan is telling us, as a career spy, that he sees behavior that can only be explained by Kompromat.

You see, Brennan gave three possibilities, that Trump is easily manipulated by flattery, or easily cowed, or compromised. The first is true but can’t account for the obsequiousness of Trump’s behavior toward Putin. The second is not true–Trump is like an enraged bull rampaging around an arena trying to gore everyone in sight. His typical response to attempts to make him back down is to explode.

So what Brennan is really saying is that there is actually only one possible explanation for Trump’s creepy and peculiar relationship to Putin.