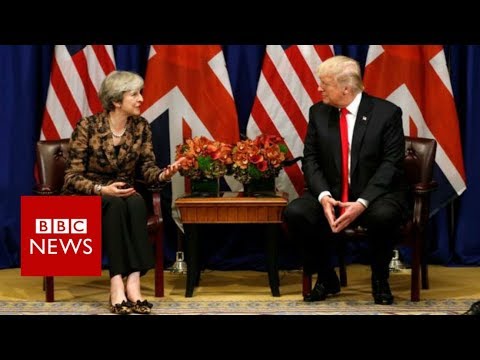 Once upon a time, President Franklin Delano Roosevelt sent Ike Eisenhower as the Supreme Allied Commander to stage D-Day at Normandy Beach along with allies and save Britain from fascism.

On Wednesday, our nazi president Donald J. Trump tried to press fascism on Britain, pissing all over the graves of the 34,137 US service personnel who lost their lives in the Battle of Normandy and northern France, fighting Nazism.

Trump on Wednesday retweeted three racist, anti-Muslim postings that had recently been put up by Jayda Fransen, deputy leader of Britain First, a Neo-Nazi organization that smears Muslims and immigrants. Fransen was convicted of “religiously aggravated harassment” for harassing British Muslims in a largely Muslim neighborhood.

Last year, a man influenced by Britain First killed British member of parliament Jo Cox for being insufficiently fascist. Her widower, Brendan, tweeted, “Trump has legitimized the far-right in his own country; now he’s trying to do it in ours.”

The ugly character of the content, combined with the equally monstrous provenance of the messages, provoked a sharp rebuke from Prime Minister Theresa May.

Trump, congenitally unable to let any criticism pass, however well deserved, then attacked the prime minister: “”Don’t focus on me, focus on the destructive Radical Islamic Terrorism that is taking place within the United Kingdom.”

Here’s another refutation of Trump. Between 2000 and 2017, 126 Britons were killed on British soil by terrorism.

The terrorism produced by the troubles in Northern Ireland seems to have been 10 to 15 times worse than that of ISIL today. All lives are precious and none should be lost this way, but Trump’s impression of an emergency is incorrect.

The British House of Commons then swung into action, calling for a government condemnation of Trump. One MP urged that Trump be arrested for inciting religious violence. My man, if he could be, he’d be doing three dimes and a nickel at Sing-Sing.

And, the Netherlands prosecutors office issued a statement pointing out that Trump’s allegation that a young man who beat another on crutches was an “immigrant Muslim” is incorrect, and that the attacker, who did time, was born and raised in the Netherlands. The Dutch site Greenstijl denied the assailant is a Muslim.

Not that it should matter. That one boy acted brutally says nothing about all Muslims or all immigrants, just as the 40 million German-Americans should not be judged by the actions of Trump.

There has been an enormous amount of faked video coming out of the Syrian war, so an unverified YouTube piece should not be taken very seriously. But even if the incident is correctly portrayed, it has nothing to do with Islam in general– extremists gonna be extreme. I can show you video of Christian fundamentalists burning the Qur’an.

As for Islam, there are more verses about Mother Mary in the Qur’an than in the New Testament, and all of them are full of praise. Muslims consider her the perfect woman, and some theologians, like Ibn Hazm, even argued she had that station of a prophet.

But then you’d have to, like, read a book to find this out, and I fear our Fuhrer doesn’t do much of that sort of thing.

Trump is an addled, hateful man spreading hate and harming the lives of people. The only silver lining is that he is so hated that he is discrediting Britain First and its sentiments just by associating himself with them.