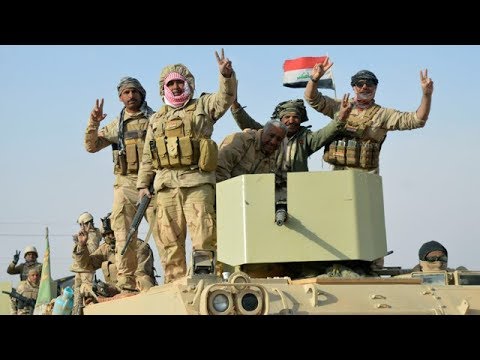 Other people are celebrating the defeat of Daesh (ISIS, ISIL) on the battlefield and its destruction as a territorial state.

Russia issued an announcement last week that ISIL has been wiped out in Syria.

Iraqi prime minister Haydar al-Abadi said Saturday that Iraq had been completely liberated from the terrorists.

In the US, there has been no victory parade, no official statement, nothing.

Given how much hysteria there was about ISIL in 2014, it is puzzling that its defeat has not been bigger news in the United States. I had all along held that ISIL as a state is a flash in the pan. (Any small handful of people nowadays can get hold of C4 and blow things up, so ISIL isn’t likely dead as a terrorist group. But it doesn’t hold territory.)

The reason the US public doesn’t commemorate this victory is that Daesh, and Muslim extremism more generally, have become a bogeyman, driving American nightmares, fears and foreign policy. This is not to say that ISIL isn’t a real threat. Those people are meaner than rattlesnakes. Nor that the US cannot suffer from a terrorism attack. It can. But the discourse of Daesh or ISIL is not rational. Their state can collapse and it isn’t a big deal here because there will be a new ISIL, since it is key to US policy making now.

In many ways, ISIL has replaced the hysteria about Communism in the Cold War era. Dick Nixon first won a congressional seat by making people in his district afraid that the Communists were going to take over. There weren’t more than 100,000 Communists in the United States, and after Khrushchev’s speech revealing Stalin’s crimes, the number fell to 50,000. They weren’t going to take over California’s 12th district, from which Nixon ran. They weren’t trying to overthrow the US government, as the FBI falsely charged. They were law abiding citizens who exercised their first amendment rights to join a political party. There was nothing illegal or threatening about them except that they didn’t think corporations should own human beings. As for Khrushchev, the US press maintained that he threatened “we will bury you.” What he actually said was that Soviet Communism would still be here when capitalism had gone to its grave.

Inside the United States, Communism functioned as a bogeyman, with right wing politicians using it to scare people and to try to convince them to give up their constitutional rights. This bogeyman was so successful that decades after the collapse of the Soviet Union, right wing politicians in the South were still calling Barack Obama a socialist in hopes of smearing him as a pinko.

In this century, Muslim extremism has replaced Communism as the bogeyman. More people in America die from falling off a ladder than from terrorism tied to the Middle East, and the biggest purveyor of terrorism is the nativist hard right.

The “war on terror,” like the “war on poverty” or the “war on drugs,” has become a plot device for politics, not a rational policy. The US public is not interested in the details. A Bogeyman is bad no matter the details.

The US public has almost no interest in Afghanistan, and very little in Iraq. The passing of Daesh/ISIL from the scene means nothing to them, because it is the eternal, ideal type of the Muslim extremist that now validates power. It doesn’t matter that *Muslims* mobilized to defeat the phony “caliphate.” Trump claimed credit for the victory all by himself.

So Daesh is defeated. It doesn’t register. Bogeymen are forever. Trump is using this one to keep out brown skinned foreigners of all descriptions.