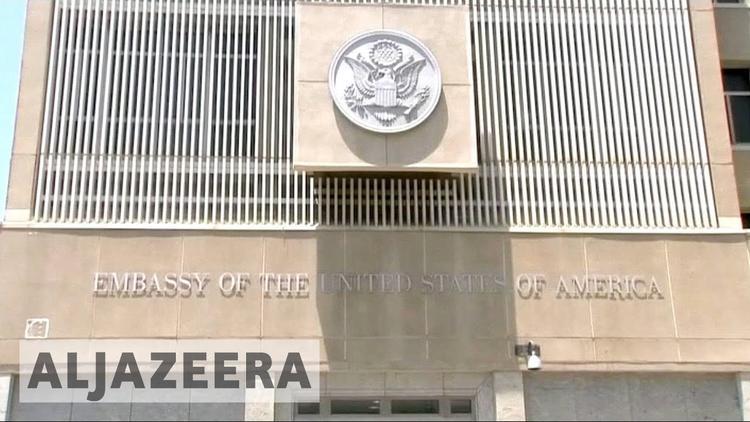 The White House says that the US is preparing to move its embassy to Jerusalem and recognize that city as Israel’s capital instead of Tel Aviv. It is calling this move a “recognition of reality.” It is not, it is the creation of a deadly and dreary reality that will get Americans blown up. Trump is doing this for his evangelical base and for billionaire campaign backers like Sheldon Adelson. The latter have tunnel blindness and can’t see the world as it is– dangerous for the rest of us because of their hobbies.

In international law, Israel does not have a right to all of Jerusalem. Jerusalem was not even awarded to Israel by the UN General Assembly partition plan of 1947 (a plan that itself has little legal grounding since the UN executive is instead the Security Council).

Israel conquered most of Jerusalem and its hinterlands in 1967. It then annexed these regions in a quite illegal move. Occupying powers are not allowed to annex occupied territory, by the UN Charter and the Geneva Conventions (which were enacted to discourage people from acting like Nazis). The disposition of Jerusalem in the law should depend on final status negotiations between Israel and the state of Palestine.

The reason that the Israeli occupation of the Palestinian West Bank has gone on for decades and become so distorted as to be illegal is that the United States wants it this way. Washington power elites treat Israel like a big aircraft carrier in the Middle East, a way to continue to dominate the region after decolonization.

This is what I wrote the last time this issue was broached, a year ago. It is all still relevant:

Jerusalem is extremely important and holy (just after Mecca and Medina) to the world’s 1.6 billion Muslims.

One of the three major motivations for Usama Bin Laden and al-Qaeda to attack the United States in 2001 was the Israeli occupation of the Muslim parts of Jerusalem. (The other two were the US sanctions on Iraq in the 1990s that were thought to have killed 500,000 children, and the presence of US troops at Prince Sultan Air Base in Saudi Arabia).

Israeli Prime Minister Ariel Sharon’s provocative demarche on the Aqsa Mosque complex in Jerusalem in 2000 caused Bin Laden to try to move up the date of the planned attacks on New York and Washington, D.C., as ‘punishment’ for Sharon’s implicit threat.

Bin Laden composed a poem for his son’s wedding in Afghanistan in fall of 2001, “The wound of Jerusalem is making me boil. Its suffering is making me burn from within.” Bin Laden was a mass murderer and not a good Muslim, but his rage over Jerusalem is shared by many in the Muslim world.

Muslims ruled Jerusalem nearly 1200 years, much longer than did the monotheistic Jews of the Ezra tradition.

It is foreseeable that a unilateral US recognition of Jerusalem as the Israeli capital, and moving the US embassy there (US embassies are big buildings increasingly built like fortresses, and it will be quite visible) will provoke attacks on the United States by angry Muslims. While the US should not shy away from taking risks on matters of principle, in this case Israel and the US are in the wrong, legally and morally, so that we’re doing something unethical and also risking attacks because of it.

Israelis consider an undivided Jerusalem as their capital, and Trump wants to acquiesce in that view. Unfortunately for the Israelis, their position contradicts international law, and if brought to the International Criminal Court it would certainly result in the conviction of high Israeli officials on charges of genocide.

In the Sykes Picot agreement during WW I, Jerusalem was given to Russia. The Communists under Lenin later pulled out of this deal, and the British got Jerusalem and the Mandate of Palestine. Palestine was a Class A Mandate and the British expected it to become the independent state of Palestine around 1949. When instead massive immigration took place by European Jews fleeing Fascism, civil war broke out in 1947-48. The 500,000 Jewish immigrants expelled 60% percent of the over one million Palestinians from their homes and made these families homeless, stateless refugees ever after. The newly minted Israelis just moved into the Palestinians’ homes and farms, forever confiscating them.

In fall of 1947, the UN General Assembly proposed an extremely unfair division of Palestine, giving massive amounts of territory to the Jews, who owned only 6% of the land. This UNGA plan was only proposal and was never endorsed by the UN Security Council, the only body with authority. The Palestinians and other Arabs rejected the partition as grossly unfair. Although Zionist propagandists say that the Jewish immigrants accepted it, their leadership did no such thing. David Ben Gurion clearly wanted much more land than the UNGA had suggested, and his forces went on to grab extra land. In later years the Israelis would try to annex parts of Egypt and Lebanon, and in 1967 they militarily occupied part of Syria and all of the Palestinian West Bank.

The UN General Assembly did not suggest giving Israel all of Jerusalem, including the Palestinian East of the city, and it didn’t have the authority to make such grants of territory in any case.. Nor did that part of the city become part of Israel in 1948. But the Israelis conquered it along with the rest of the West Bank in 1967. They then annexed all of Jerusalem and part of the West Bank, adding that territory to Israel. Although military occupation of territory during war time is not illegal, annexing territory by military conquest is definitely illegal. It is strictly forbidden in the UN Charter and subsequent treaties and instruments, including the Rome Statute that created the International Criminal Court. Moreover, military occupiers may not radically alter the lifeways of the people they occupy (1907 Hague Agreement, 1949 Geneva Accords). Israel’s occupation of the Palestinians has become illegal because of extensive Apartheid policies.

So, Palestinian East Jerusalem belongs to Israel only in the way that the French city of Nice belonged to Mussolini during WW II (he annexed French territory to Italy by military fiat).

What is curious is that most Americans do not know that Jerusalem was one of three planks in al-Qaeda’s anti-American platform. Even more curious is that the US responded to 9/11 by invading and occupying Iraq, making Muslims even more upset. (Incoming Secretary of Defense Gen. Mike Mattis invaded and destroyed Falluja in 2004; one of the insurgent groups there had modeled itself on Hamas in Palestinian Gaza, and fought US occupation as an analogy to the fight against Israeli occupation). Mattis later frankly admitted that the Israeli occupation of the Palestinian West Bank is a severe security problem for the United States.

Now Trump is planning to ratchet up tensions even further.

The national security elites in Washington and Tel Aviv have dealt with Muslim anger over the impoverishment of the Palestinians and the Israeli threat to the Muslim holy places of Jerusalem by covering up these actions, denying them, obfuscating them, and then crushing any Muslims who dare complain about them.

They call this counter-terrorism policy. And they’ve made it work for them in grabbing power, both in the world and at home, where they argue to us that the terrorism that they are helping provoke means we have to give up the Bill of Rights.