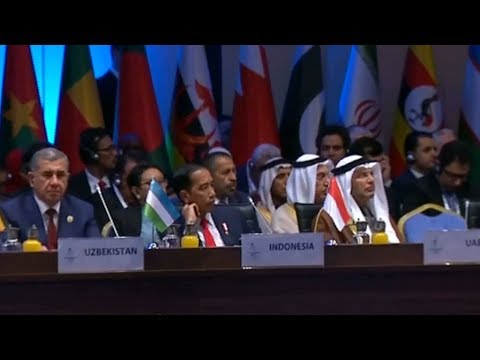 The Organization of the Islamic Conference, a regular meeting of the foreign ministers of 57 Muslim-majority countries, held an extraordinary session in Istanbul on Wednesday, in which they rejected US President Donald Trump’s recognition of Jerusalem as the capital of Israel. In a communique they called Trump’s decision “unilateral,” “illegal,” and “irresponsible” and said it was “null and void.”

The Muslim powers said that they now officially recognize East Jerusalem as the capital of the Palestinian state, and they urged other countries to so recognize it.

They said that Trump had deliberately sabotaged all the efforts expended over the years to achieve Israeli-Palestinian peace and that he had benefited extremism and terrorism, and had threatened international peace and security. They observed that Trump’s decision had the practical effect of withdrawing the US from any role as a mediator in achieving peace.

The Muslim leaders condemned Trump for encouraging the Netanyahu government in Israel to continue its policies of colonial settlement and of Apartheid, as well as of ethnic cleansing of the Palestinians.

The communique said that if the Security Council does not mobilize to intervene on Jerusalem, that they would take the issue to the UN General Assembly.

For his part, Palestinian president Mahmoud Abbas opined that there will be neither peace nor stability until East Jerusalem is definitively recognized as the capital of a Palestinian state.

Abbas also said that from now on he and his organization can never again consider the United States as honest broker in the peace process.

Dude, the US was never an honest broker. The US government has from the time of Harry Truman been dedicated to screwing over the Palestinians.

The Trump administration line on Mahmoud Abbas is now that he “walked away from the peace process.” This is like saying that Salma Hayek walked away from reconciliation with Harvey Weinstein.