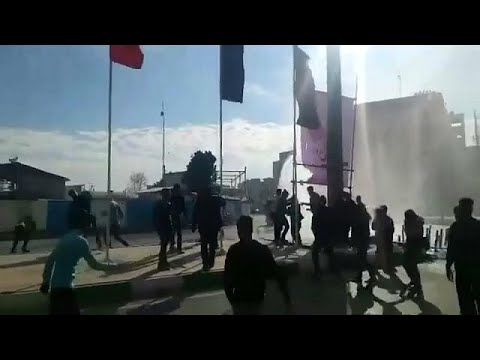 The scattered urban protests that began in Mashhad on Thursday spread to several other provincial cities on Friday, including Qom, Rasht, Kerman and Qazvin. This is like protests in the US starting in Boston and spreading to Denver and Cleveland.

Predictably, Trump had to get involved, tweeting an objection to the government’s arrest of protesters. Jeff Sessions had people arrested for laughing in protest at him. If people in Iran think Trump is behind this movement, that would kill it right there.

One thing I have to complain about in the US press coverage is people saying protests in Iran are rare because it is a totalitarian state. Actually small protests about economic issues are pretty normal from time to time and here and there. There have been lots of protest movements with a political overtone, as well. Something like summer of 2009, when there were really big rallies in the big cities that lasted for months– now, that is rare. It remains to be seen whether this wave of protests is all that important.

It seems clear that the rallies began with complaints against Iran’s bad economy. People are complaining about inflation, high prices and the reduction or removal of government subsidies.

That economic focus of the protests is a little ironic. Iran is back up to exporting 2.5 million barrels a day of petroleum. President Obama’s severe sanctions before the nuclear deal in summer, 2015, had involved twisting the arms of countries like South Korea not to buy Iranian petroleum, and had reduced exports to 1.5 mn barrels per day. Moreover, today the price of petroleum is roughly $60 per barrel, which is way up from last summer. In short, Iran should have had a lot of money coming in during the past couple of months.

But at the level of the ordinary person who doesn’t directly share in oil wealth, there was a loss of real income during the Obama sanctions and people haven’t recovered. Moreover, since the GOP Congress and Trump are trying to destroy the nuclear deal, they have declined to lift US unilateral sanctions on Iran, and implicitly threaten European corporations who plan to invest in Iran with US Treasury Department sanctions. So the gold rush of investment that Rouhani promised the public to come as a result of the nuclear deal has not materialized to the extent that Iran wanted. And lack of foreign investment has hurt job growth.

In addition, a problem with rentier states like Iran, which depend on one or two pricey primary commodities, is that it is hard to get the money into people’s hands, even where government bureaucrats aren’t hopelessly corrupt and keep it for themselves. If you just give the money out it causes inflation by increasing the money supply in the absence of any rise in productivity, i.e. any increase in goods produced per person per hour. Inflation is too much money chasing too few goods. And inflation eats up the value of money. So people end up worse than before. Moreover, having a pricey primary commodity hardens your currency artificially. Iranian raisins and pecans and carpets are expensive in India for the arbitrary reason that Iran has petroleum. So exports are hurt (ironically, Obama’s sanctions may actually have been good for non-oil exports since the value of the riyal dropped). Small oil countries like Kuwait can sometimes bribe their people to keep quiescent, though that doesn’t always work (in Bahrain sectarian disputes make that bargain hard to implement).

Anyway, what appear to be remnants of the failed 2009 Green Movement emerged among the crowds, chanting not for reform but for the fall of the regime. People condemned the “dictator” (Ayatollah Ali Khamenei, Iran’s clerical leader) and also slammed President Hassan Rouhani. They said they wanted the akhunds, a disrespectful word for clerics, to “give back the country.”

They also wanted to know why Iran was spending all that money propping up the al-Assad regime in Syria instead of spending it on the Iranian public. This theme of “Iran first” had also been prominent in 2009.

People in Quchan (in the far east of the country over near Turkmenistan) were chanting “Death to Rouhani!” and denouncing high prices:

To the extent that the protests come out of economic distress, the US is certainly a big part of the problem here, acting in part at the behest of the Israel lobbies and in part at those of the arms manufacturers and oil interests. The US overthrew the Iranian government in 1953 in part by putting a severe boycott on nationalized Iranian oil, and provoking protests against the nationalist prime minister Mohammad Mosaddegh.

That is the GOP and Trump playbook again these days.

Which is not to say that there aren’t real discontents in Iran. It remains to be seen how widespread and intense they are.