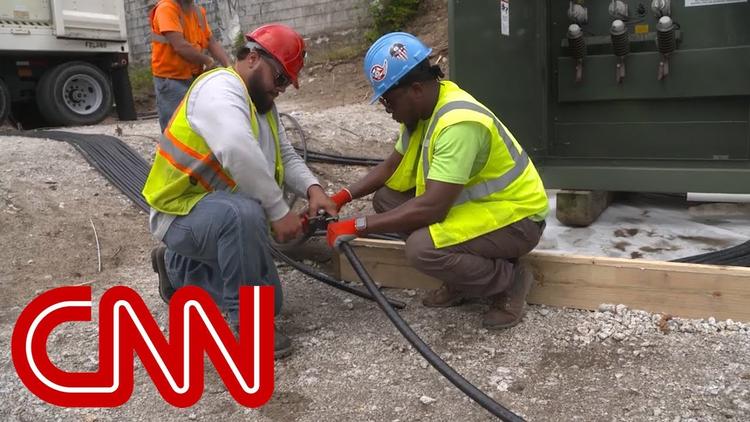 Puerto Rico is now in its 100th day since Category 4 Hurricane Maria struck the island, damaging vast amounts of infrastructure and nearly eliminating its electrical and running water systems.

Though some of these basic necessities have returned to the island, residents who have electricity say that “blackouts are part of life” and are angry that they are still in “recovery mode.”

Clear statistics on electricity are hard to obtain on the island, a U.S. “territory.” According to several news outlets, one million people are still without electricity. But according to Engineering and Agronomy High School President Pablo Vazquez, only 44 percent of Puerto Rico’s nearly three million residents have reliable energy in their homes.

“We had to cancel our Christmas Eve dinner,” resident Irma Rivera Aviles told NPR. The vast majority of the population on the predominantly-Catholic island was forced to spend Christmas in the dark.

While infrastructure in and around the tourism-dependent capital city of San Juan has returned, rural areas remain without adequate health care.

In terms of transportation, 27 sections along several highly-traveled highways are closed, 15 fallen bridges have not been rebuilt and hundreds of traffic lights are down.

Forty four public schools remain closed due to hurricane damage. The Secretary of Education recently announced that 179 education centers will remain closed, a move some suspect is intended to save the island’s administration US$7.7 million. Prior to Hurricane Maria’s landfall, the island’s debt reached US$74 billion.

As U.N. Special Rapporteur on the Right to Housing Leilani Farha put it, “We can’t fail to note the dissimilar urgency and priority given to the emergency response in Puerto Rico, compared to the U.S. states affected by hurricanes in recent months.”

Just weeks after the brutal storm hit, President Donald Trump tweeted, “We cannot keep FEMA, the Military and the First Responders, who have been amazing … in P.R. (Puerto Rico) forever! … Congress to decide how much to spend.”

That same day, U.S. Congress decided to defer voting on disaster relief legislation for Puerto Rico and the U.S. Virgin Islands, both of which suffered from severe hurricane and fire damage this year.

Democrats insisted Puerto Rico was not getting enough assistance, while fiscally conservative Republicans said the relief amount was too high.