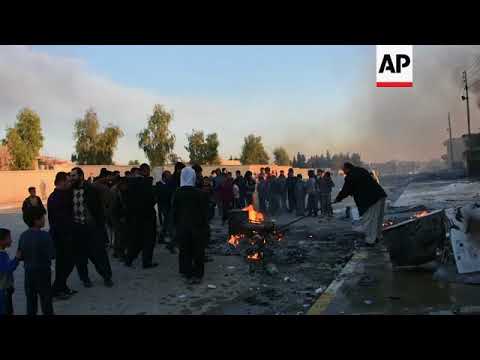 The end of the year brought strife to Iraqi Kurdistan, The northern region has to deal with a reduced area of influence, internal and external political problems, and a financial crisis.

This year brought major transformation to the semi-autonomous northern region of Iraqi Kurdistan and by the end of the year it had become clear that these changes were not necessarily going to be positive. The future is not looking so bright up north.

This could well have been the most difficult year for Iraq’s Kurds since 2003 and the fall of Saddam Hussein, Mohammed Baziani, the head of the Al Huda Centre for Strategic Studies, told NIQASH.

“The Kurdish region is heading for total collapse,” he argues. “Because it no longer has any united direction, while other parties do.”

Baziani says the Kurdish region now has few options: They can wait the problems out until the Iraqi elections next year, at which stage maybe things will change; or they can continue to watch things deteriorate.

The Referendum On Independence

It is true that the relationship between Iraqi Kurdistan and Iraq’s federal authorities in Baghdad had not been good for some years. But they really began to worsen after July when Iraqi Kurdish political parties, spurred on by the then-president of the region, Massoud Barzani, decided to hold a referendum on independence. The regional poll on whether the Kurds should try to secede from the rest of the country and form their own state – a long-held dream for many – would be held on September 25.

There was much opposition to the idea, from both inside and outside the Kurdish region. Opposition parties did not like the idea and many of Iraqi Kurdistan’s foreign allies, including the US, Iran and Turkey, also said they didn’t think it was a good idea. All of them recommended ongoing dialogue rather than a referendum.

The whole situation became even more turbulent when those in the Kirkuk area agreed that they too would participate in the referendum. Kirkuk is what is known as a disputed territory in Iraq. The Kurdish say it belongs to them but Baghdad disagrees, saying it is part of Iraq proper. The population there is mixed but the area had been under the control of the Kurdish military for some time. The Kurdish participation in the referendum was seen as something of a red flag for Baghdad.

After the referendum was held and resulted in exactly the outcome that was predicted – almost everyone who took part voted for independence – Baghdad authorities began to retaliate almost immediately.

The federal government made it clear who was actually still in charge, closing Kurdish airspace and demanding that international border crossings be put back under federal control. It became very clear, very fast, that much of what many Kurdish voters had been taking for granted as their regional right, had always just been Baghdad doing them a favour – or perhaps being otherwise preoccupied, who knows.

On October 16, tensions escalated further as Iraqi military pushed Kurdish forces back behind their original regional borders. There were occasional confrontations and much confusion but eventually most of the Kurdish military pulled back voluntarily.

The areas the Kurdish lost meant the loss of significant regional revenues, both from oil production and from customs and other revenues collected at international borders.

The political conflict goes on today, with both sides releasing contradictory statements and neither appearing willing to back down completely.

The referendum: Their own state is a long-held dream for Iraq’s Kurdish minority.

Meanwhile inside Iraqi Kurdistan political parties also remained far from united. They were not only dealing with the fallout from the independence referendum and Baghdad’s reaction to that, with every party calling out every other party as a traitor to the Kurdish cause, but there were also ongoing political issues.

The Iraqi Kurdish parliament had been suspended for 22 months – the region was barely functioning as a democracy during that time – but was reconvened in mid-September. However, many of the members of the region’s opposition parties – the Change movement and the Islamic parties – refused to participate. Key members eventually resigned. In fact, both before and after the referendum, the region’s opposition parties began to call for the dismissal of the current government and the formation of a new one.

Instead the current parliament decided to postpone elections, scheduled to be held in November, for eight months. On October 29, Kurdish politician Massoud Barzani announced he would step down from the presidency – his holding onto this role had long been a problem for every other political party in the region other than his own. Presidential powers were distributed to different offices and Barzani formed a new council he would head; his critics say that he is still hanging onto power even though he is not president anymore.

Internal and inter-party conflicts continue and most recently, in late December, the major opposition parties in Iraqi Kurdistan withdrew from the regional parliament altogether.

Part of the reason for all the internal political tension, analysts say, is because of the loss of the region’s long-term political leadership, a leadership that, for all its faults, had maintained political checks and balances and some semblance of unity.

On May 19, Nawshirwan Mustafa, leader of the Change movement, passed away in Sulaymaniyah after a long illness. Then one of the most prominent political leaders in Iraqi Kurdistan, Jalal Talabani, also died – he had been in Germany for medical treatment for some time following a stroke in 2012.

The death of both of these leaders and the resignation of Barzani, heralds a changing of the guard. As a new generation of Kurdish leaders jockey for power, old wounds have been reopened, showing just how fragile Kurdish unity actually is.

The end of the year in Iraqi Kurdistan has brought yet another crisis. At the time of writing, a number of Kurdish cities were under tight security as local military and police were deployed to prevent further protests.

Iraqi Kurdish locals had been demonstrating corruption and the fact that many civil servants had not been paid for some months. The Kurdish government has major debts, has seen its revenue sources reduced significantly and owes back pay to hundreds of local workers.

The region that was once doing so well, and seemed so peaceful and prosperous, that it claimed the title “the new Dubai”, has fallen onto extremely hard times, both politically and economically.

“If these kinds of power plays continue and there is no real change, the Kurdish region is going to face difficult challenges next year,” Ribawar Karim Mahmoud, a professor of political science at the University of Sulaymaniyah, told NIQASH. “The whole region will go backwards. If things stay like this the Kurdish region will make more compromises at the expense of its own people, to hide its internal problems.”