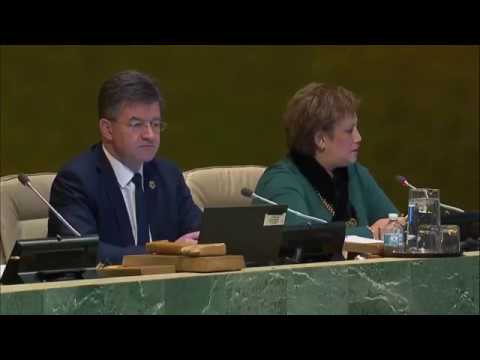 The Arab and Muslim worlds exulted Thursday over their massive victory at the United Nations General Assembly, which passed a resolution condemning the Trump administration’s recognition of Jerusalem as the capital of Israel.

Despite his crude threats to cut off US aid to countries who bucked him only 9 countries actively backed Trump up here. And if you look hard, they are more Pacific postage stamp islands for the most part than what most people would think of as, like, you know, countries. Trump’s sycophants included Palau, Nauru, Micronesia (FS), and Togo.

128 countries voted a straight “no!” in Trump’s face, including France, Britain, Germany, Spain, Italy, Greece, China, Russia, Brazil, South Africa, Indonesia, India, Turkey etc. etc. In other words both the richest and the most populous countries in the world condemned Trump’s announcement.

In fact, of course, 14 members of the UN Security Council had already voted against Trump, but he stopped their resolution by exercising the US veto.

Was anybody afraid of the threats from the Bonnie and Clyde of international diplomacy, Trump and Nikki Haley? No. Afghanistan and Pakistan are both big US aid recipients and both voted “no!” Turkey voted no despite being NATO (like Britain, France, etc.)

Most of the 35 countries that abstained did so because of their own internal politics. Australia may have abstained to please Trump, but the fact is that its government is extremely pro-Israel, so actually an abstention is a kind of slap in the face to Trump and Netanyahu. The same could be said for the Czech Republic and Hungary.

To tell you the truth I have no idea why Mexico abstained, but I am confident that it was not because of fear of Trump or wanting to make nice with him.

Anyway, the bulk of the world, and as I said, both the wealthiest and the most populous nations, rebuked the US president.

Turkey’s president Tayyip Erdogan spoke for a lot of the world when he told Trump, “you cannot buy our will with dollars. Erdogan lamented that the US, the cradle of democracy, had stooped to buying international votes with its aid.

The foreign minister of Iran, Mohammad Javad Zarif, said that the world had rejected Trump’s hostile attempts at scaring people.

As I noted yesterday, the US only gives out $42 bn. in aid a year, about 1 percent of the Federal budget, and most of it goes to a handful of countries– Israel, Egypt, Afghanistan, etc. In fact if it weren’t for the Israel lobbies getting Congress to throw so much money at Israel and Egypt (a bribe to keep it in Camp David), the US would be giving out almost no civilian aid. Israel is a prosperous country that does not need US aid, and truly needy countries get peanuts from Washington.

So the threat of an aid cut-off just did not matter to most countries.

In fact, most of them voted on principle and in accordance with international law.

Trump’s move violated UN Security Council resolution 470 478 of 1980, which was passed without a US veto after the then Israeli government tried to grab all of Jerusalem. The divided city, with Jewish and Palestinian neighborhoods, was never awarded to Israel by any international body or law, and simply stealing your neighbor’s territory through aggressive warfare is forbidden by the UN Charter as of 1945, what with the world wanting to stop any further Axis-like behavior and all. Most Palestinians insist that East Jerusalem become the capital of the forthcoming Palestinian state. The point is that the status of Jerusalem is a matter for final status negotiations among the parties, not unilateral fiats of Trump’s rash sort.

The countries of the world would not like to be treated the way Israel is treating the Palestinians, and they don’t want a free-for-all over neighbors’ territory and they don’t want the US going around bullying people into acquiescing in severe human rights violations.