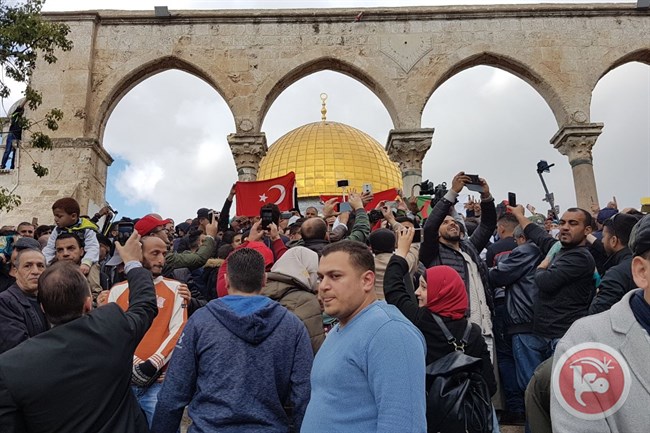 BETHLEHEM (Ma’an) — Thousands of Palestinians took to the streets on Friday in continued protest of US President Donald Trump’s announcement last week recognizing Jerusalem — the Eastern part of which is illegally occupied by Israel in contravention of international law — causing clashes with Israeli forces to erupt across the occupied West Bank, East Jerusalem and besieged Gaza Strip.

Sources from the Palestinian Red Crescent said that teams treated at least 54 injuries in the West Bank and East Jerusalem as of Friday afternoon: four with live fire, 11 with rubber-coated steel bullets, 37 tear-gas suffocation and two others.

Meanwhile, the Red Crescent of the Gaza Strip said that at least 96 injuries were reported including, 38 with live ammunition.

Clashes erupted between protesters and Israeli forces along the border between Gaza and Israel.

Israeli forces opened fire at protesters near the Beit Hanoun checkpoint in the northern Gaza Strip.

The Palestinian Ministry of Health announced that three protesters were moderately injured with live fire in eastern Jabaliya, while two others were injured in eastern al-Bureij and another in Gaza City.

One youth was injured with a bullet in the back during clashes in eastern Gaza City, and and

was transferred to the Abu Youssif Najjar Hospital.

Another Palestinian youth was injured with live ammunition in the leg during clashes at the Erez crossing and was transferred to the Indonesian Hospital in northern Gaza.

A march set off from the Al-Aqsa Mosque compound following Friday prayers, as Israeli forces were heavily deployed across the streets and alleyways of the Old City.

Clashes erupted in the Bab al-Zawiya area in central Hebron City following a march that set off from the al-Hussein Bin Ali mosque.

Clashes also erupted at the entrance of al-Arroub refugee camp, Beit Ummar and the Shuyoukh village in northern Hebron and in Tarqumiya in western Hebron.

Following demonstrations in the villages of Kafr Qaddum, Azzun and Jayyous, clashes erupted between Palestinians and Israeli forces.

In Kafr Qaddum clashes erupted at the eastern entrance of the town, where three youths were injured with rubber-coated steel bullets.

A march set off from the al-Manara circle in central Ramallah City, commemorating the 30th anniversary of the Hamas movement establishment and condemning Trump’s decision.

Clashes erupted with Israeli forces at the checkpoint, at the Beita crossroads in southern Nablus and in the Beit Fruik and Salem village in eastern Nablus.

Medical sources said that 100 Palestinians were injured during clashes, and that four were detained by Israeli forces at the Huwwara checkpoint.

Clashes erupted with Israeli forces in western Tulkarem City after hundreds of Palestinians had set off in a march following Friday prayers.

Activist Khairi Hannoun was hit with a tear-gas bomb in the head.

A protest set off in Jenin following Friday prayers, as hundreds of Palestinians marched waving Palestinian flags and chanted slogans in support of Jerusalem and condemning the US