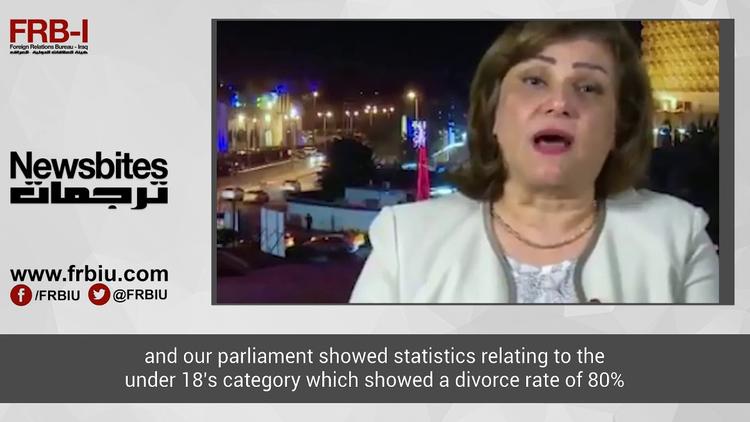 Amendments Would Have Instated Discriminatory Laws on Family Matters

The amendments would have covered areas including inheritance and divorce, and, by giving powers to impose family laws to certain religious communities, would have allowed girls to be married as young as age 8 under some of these laws. The head of the women’s rights committee in parliament rejected the initiative in mid-November, blocking the bill. However, two leading women’s rights organizations say that some parliament members have threatened to continue to push for the amendments to secure votes in some parts of the country in the May 2018 parliamentary elections.

“Parliament’s women’s rights committee has made a great contribution to Iraqi society in rejecting this effort to scuttle Iraq’s family law protections,” said Belkis Wille, senior Iraq researcher at Human Rights Watch. “Threats by lawmakers to dismantle protections under the current law and restore discriminatory laws would be devastating to women’s rights.”

Parliament members from several Shia Islamic parties, spearheaded by the Fadhila Party, to which the justice minister belongs, proposed the amendments on November 1. The proposed amendments would enshrine Shia and Sunni religious establishment control over marriage-related matters and require courts to make exceptions to existing legal protections.

Hanaa Edwar, founder and general secretary of Al-Amal Association, a leading Iraqi human rights organization, and a member of the Human Rights Watch Middle East Advisory Committee, said the members also threatened to continue to push for the amendments unless the women’s rights committee dropped key protections in a domestic violence bill pending before parliament since 2015.

“The proposed amendments seek to establish sectarianism and undermine the principle of citizenship and national identity of Iraq,” Edwar told Human Rights Watch. “The amendments would violate key rights enshrined in Iraq’s constitution and laws, and would treat women as inferior to men.”

The current law applies to everyone regardless of their religious affiliation, and is administered by Iraq’s secular court system. The proposed amendments instead would require the secular courts to apply religious law on marriage, divorce, and inheritance. The amendments also recommend – but do not require – establishing specialized Personal Status Courts, headed by religious judges, to adjudicate family law issues.

The current law sets the legal age for marriage at 18, but allows a judge to permit girls as young as 15 to be married in “urgent” cases. According to a 2016 The United Nations Childrens’ Fund (UNICEF) report, 5 percent of Iraqi children are married by age 15, and 24 percent by age 18. According to a women’s rights lawyer, this is because many families arrange marriages through religious marriage contracts outside the legal system, though they are illegal.

The amendments also would undermine protections for divorced women. Under the current law, if a husband requests a divorce, the wife has the right to remain in their marital home for three years at the husband’s expense and to receive two years of maintenance and the current value of her dowry. If a wife requests a divorce, a judge can award her some of these benefits depending on the circumstances.

Because religious law offers fewer protections, under the proposed amendments, women would have lost many of these protections. For example, under the Jaafari Shia school of law, the woman has no right to the marital home, maintenance, or her dowry and children remain living with her for only two years, regardless of their age, during which she is not allowed to remarry.

Women would also lose some inheritance rights. Even under existing law, daughters inherit a lower proportion of a parent’s wealth than sons. But under some religious laws, daughters would inherit even less and if the family has no son to inherit the agricultural land, it would revert to the state.

“The current personal status law was drafted by taking the most rights-upholding aspects of the different sects in Iraq,” Yanar Mohammed, president of the Organization of Women’s Freedom in Iraq, told Human Rights Watch. “The push for these amendments is part of a political game linked to the upcoming May 2018 parliamentary elections.”

She said that while the driving forces behind these amendments came from a group of Shia Islamic parties, she feared that some Sunni members of parliament would also support them to give the clergy more authority over daily life. This is the second attempt in recent years to introduce discriminatory religious personal status laws. In February 2014 the Council of Ministers approved a draft law, the “Jaafari Personal Status Law,” which would have covered Iraq’s Shia citizens and residents, prohibited them from marrying non-Muslims, effectively legalized marital rape, prevented women from leaving the house without their husbands’ permission, and allowed girls younger than 9 to be married with a parent’s approval. After pressure from local human rights activists, parliament did not move the bill forward.

These new proposed amendments violate the Convention on the Elimination of All Forms of Discrimination against Women (CEDAW), which Iraq ratified in 1986, by giving fewer rights to women and girls on the basis of their gender. They also violate the Convention on Rights of the Child, which Iraq ratified in 1994, by legalizing child marriage, putting girls at risk of forced and early marriage and susceptible to sexual abuse, and not requiring decisions about children in divorce cases to be made in the best interests of the child. The draft amendments appear to violate the International Covenants on Civil and Political Rights and on Economic, Social and Cultural Rights by granting fewer rights to certain people on the basis of their religion.

The draft amendments also starkly contrast with article 14 of Iraq’s constitution, which prohibits “discrimination and distinction between Iraqis” and guarantees the equality of all Iraqis “without distinction to religion, faith, nationality, sex, opinion, economic or social status.” Article 13 of Iraq’s constitution stipulates that it is the “supreme law” in Iraq and that “no law that contradicts this Constitution shall be enacted.”

The CEDAW committee, the body of international experts who review state compliance with CEDAW, concluded in 2013 that, “identity-based personal status laws and customs perpetuate discrimination against women and that the preservation of multiple legal systems is in itself discriminatory against women.”

“While lawmakers may have failed this time around, the threat of these terrible amendments still looms, and is being used as leverage to try to whittle away at key human rights protections in the domestic violence law,” Wille said. “Iraqi parliamentarians should reject these efforts to reverse the progress Iraqi society has made in creating laws that protect all of its citizens.

Iraqi MP “How can we have a healthy society if 9 year old girls are up for marriage?”