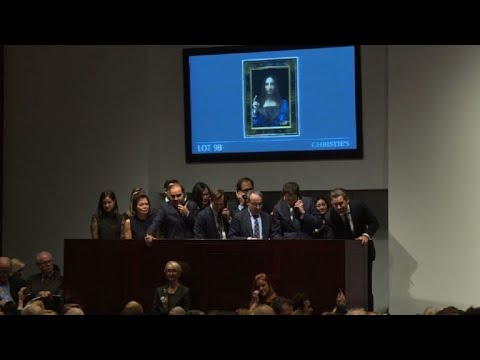 Mystery over the secret buyer of a record $450.3 million painting was solved after it was discovered that Saudi Crown Prince Mohammed Bin Salman had used a proxy to get hold of one of the prized assets in the arts world.

The power hungry de-facto ruler of the Kingdom leading an anti-corruption charge against oppositions and prominent business figures splashed an eye watering half billion dollars on Leonardo da Vinci’s depiction of Jesus Christ.

While the purchase has raised eyebrows amongst many Muslims – who generally disapprove of depictions of prophets- Bin Salman’s decision to purchase the most expansive painting in the world has raised questions over his anti-corruption charge.

Bin Salman’s motives have previously come into question after it was discovered that the young prince had extravagantly decided to buy a half a billion dollar 440-foot yacht from a Russian vodka titan on an impulse.

Suspicions over the mystery buyer were raised after a Saudi Prince, unknown to the arts world, purchased the painting at Christie’s auction house. Officials at Christies established the identity of the proxy buyer as Prince Bader, who is part of the distant branch of the Saudi royal family and who is said to be a business partner of Bin Salman.

Bader’s interest in the painting raised eyebrows which prompted Christie’s officials to inquiry about his source of funds for the lucrative purchase. Investigations carried out by the Wall Street Journal, US government intelligence and Saudi art world figures confirmed that the buyer of the $450 million painting was in fact Bin Salman.

It’s reported that US intelligence was closely tracking the activities of Bader which led them to the conclusion that he was acting as a proxy for Bin Salman. “It is a fact that this deal was done via a proxy,” said a figure from the art world.