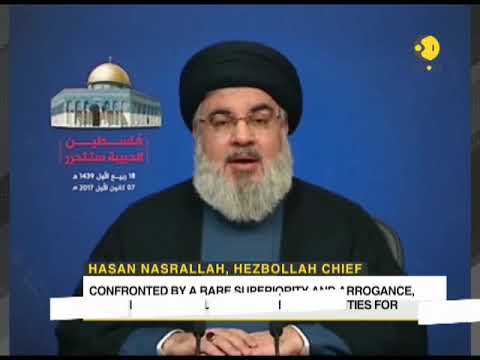 Hassan Nasrullah, the secretary general of Lebanon’s Hizbullah, called for a new Palestinian uprising or intifada in the wake of Trump’s recognition of Jerusalem as Israel’s capital. He said Trump had thereby issued “A second Balfour Declaration.” (The first was in 1917 when the British cabinet gave away Palestine to the Zionists in a fit of imperial diktat.)

He said in a televised address that supporting the Palestinian resistance was the best way to respond to Trump’s announcement. Nasrullah warned that Trump’s decision created dangers to Palestinians and would encourage Israeli colonists on Palestinian land and create new dangers to the Muslima nd Christian holy places in Jerusalem, above all the Aqsa Mosque.

He called for protests in every possible way, including physically but also via social media on the internet.

He also urged the revival of the Arab League boycott of Israel.

He said, “We are facing an administration that does not respect international treaties.

Nasrullah is calling for large rallies in Lebanon itself early next week. For him, Trump’s announcement is a God send, since Nasrullah had been under the gun from the Saudis and they had required Lebanese prime minister, Saad Hariri to resign.

Hariri has reinstated himself. But the pressure on Hizbullah from the Saudis is still there. The Jerusalem issue allows Nasrullah to fight back against the Saudi attempt to rein it in in Yemen and Syria.

Since the Saudis have been relatively openly playing footsie with Israel, Nasrullah has the street cred to appeal to the Arab masses.