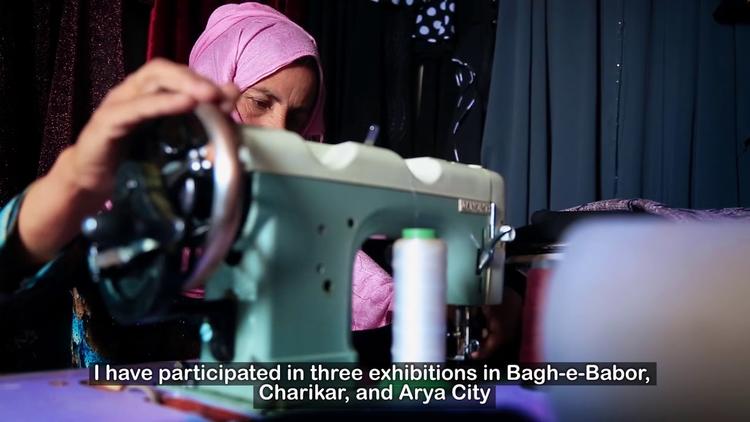 In this deeply conservative society, these women are busting stereotypes every day.

The typical depiction of an Afghan woman looks like this: Timid and fearful, she is a victim of her extremely conservative and regressive society, unable to move around or do much without a man. But some Afghan women are busting these stereotypes, creating a niche for women to empower themselves and change the status quo.

A 36-year-old restaurant owner named Laila Haidary walks around the cafe gardens, carefully tending to the colorful foliage that grows generously around Kabul. She narrates her story of building a business in Afghanistan, a country governed by the rules of men. Overlooking the gardens is a midsize structure: a traditional Afghan house, with thick walls, large windows, and ample courtyard space, converted to a cozy restaurant with old tables and chairs and plenty of handmade rugs. The vibe is welcoming.

Haidary explains she wanted to provide a social space for artists and other young Afghans who want to interact with their culture and rich heritage. “This idea in itself had its own challenges because our extremely conservative society does not always approve of artistic expressions. Added to that, the fact it is run by a businesswoman makes many people uncomfortable,” she says.

Haidary’s cafe is among the many newer restaurants in Kabul, and around Afghanistan, that are either owned or managed by women in an otherwise male-dominated industry. Although data measuring this trend wasn’t available at the time of publishing, anecdotally, more women are entering the service industry: Within a two-block radius of my home in Kabul, I can count seven restaurants that have come up in the past year; that wasn’t the case in 2014, when I first came here.

Of course, not every woman in the industry is a business owner. A small but significant number of Afghan women are working jobs in the service sector—a profile that was unimaginable for Afghan women a decade ago and is still considered inappropriate.

“I feel like I’m breaking stereotypes every day by just being here.”

“I feel like I’m breaking stereotypes every day by just being here. That makes me feel very proud of myself,” says 20-year-old Mujda Nasiri, who started working at 50/50, a local fast-food restaurant in Kabul, about a year ago. “Initially, my parents were reluctant, but now that they see how independent I have become, financially and personally, they’re happy for me,” she says, adding that she had always been fascinated by the restaurant industry.

In a deeply conservative society such as Afghanistan, women have few avenues to pursue careers. Many of the jobs available—such as manual labor, technical positions, and banking and finance—are not considered suitable for women because traditionally a woman’s priority has been with her family and, especially, their honor. Added to that are the decades of war that have left the Afghan economy enormously dependent on foreign aid, thereby increasing unemployment and competition in the markets. As the rate of unemployment peaked at 40 percent in 2015, it has been even more challenging for women to be considered for jobs in a market that tends to favor men.

Laila Haidary sits at one of the tables in her restaurant in Kabul, Afghanistan, 2017. Photos by Ivan Flores

However, restaurants such as 50/50, which strives to be an equal opportunity employer, hires several women in various positions. “We are trying to create an all-inclusive space for our customers, especially for women and families, who can come here without any fear of harassment. Such a place is also good for women to work at,” explains Zahir, 37, the restaurant manager at 50/50 (most Afghans traditionally go by just one name). “We also find that women employees are more professional, timely, and able to work with grace despite pressures—a right fit for this industry.”

Nasiri is one of three waitresses the restaurant hired last year, and the move was welcomed by many of their customers. “I’ve had a very good experience working here; my colleagues are like my family and are very protective of my safety,” she says, recalling an incident where a displeased customer lectured her about how inappropriate such a job was for a woman.

Women had few places to engage socially in the extremely conservative and patriarchal society under the Taliban regime.

“But I see that there has been a change in attitudes,” Nasiri says. “I find that a lot of our customers are not only happy to see me serve them, but [are] also very encouraging of my work. This one elderly gentleman was so happy to meet a working woman, that he left me a Afs1000 [$15] tip to keep me motivated,” she says, adding that the joy of meeting new people every day is a bigger motivation than money to stay with this job.

Twenty-five-year-old Nikbhakt, a barista at a local coffee shop frequented by the many foreigners and expats in Kabul, would agree with Nasiri. “I’ve been making and serving coffee for the last four years, and the best part of my job is interacting with people from around the world,” she says. There was a time when an Afghan woman couldn’t leave the house without a mahram—a male escort who is a blood relative—let alone talk to other people. Women had few places to engage socially in the extremely conservative and patriarchal society under the Taliban regime in the late 1990s.

Parents have reason to be concerned about their working daughters. Harassment at work and in public is a common sight in Kabul and other Afghan cities. Afghan women have to fight many gender stereotypes and inequalities along with abuse if they choose to pursue a career, any career. As a result, many women prefer jobs that require less mobility because even the act of traveling to work daily can often subject women to street harassment. Added to this the rising insecurity further discourages families from allowing their daughters to go to work.

Last year, the cafe where Nikbhakt works was attacked, and she barely missed the explosion that claimed the lives of two people, including the cafe’s guard. “I was extremely depressed for a long time after that attack. My family didn’t want me to work anymore, and I didn’t want to step out of home, either,” she says. “But now I know that cutting myself from the world isn’t a solution, and decided to come back to work two months ago.”

Since no institutes offer training to work in the service sector, Afghans have to learn on the job, which can be tedious for the employers. “We’ve had to let two of our female staff go because they were unable to cope with the pressure of working in a restaurant, but that isn’t to say that women can’t work in this industry,” Zahir says. “The environment, of course, matters, and it is perhaps up to us as employers to help create working environments that allow women to work comfortably and to their full potential.”

Women customers are drawn to restaurants where women work. “Having women around the restaurant creates a comforting and calm environment that eventually attracts a wide diversity of customers,” says Haidary, who also employs several women as servers, managers, and cooks.

She started her cafe as a way to fund her other initiative: the Mother Camp, a nonprofit drug rehabilitation shelter she opened seven years ago for homeless addicts in Kabul. When the funding to the shelter started to dry up (few in Afghanistan consider donating to rehabilitating drug addicts), Haidary and her volunteers came up with the idea of establishing this cafe. Even today, most of her employees are former or recovering addicts from the Camp, which also continues to help hundreds of Afghans recover every year.

Haidary has been successful as a restaurateur, but the ride hasn’t been smooth. On the contrary, she faced several threats and intimidations, sometimes even from her own customers who would show up drunk or high on hashish to her cafe, breaking her one cardinal rule—no drugs, no alcohol.

Terrorized but not afraid, Haidary would often take these men head-on. “There was a time when she literally pounced on a large Afghan man who was a guard to a local parliamentarian,” recalls a regular customer at Taj Begum who witnessed the attack. “He had come drunk to the cafe, gotten into a brawl, and threatened to have [Haidary] shut down. When [she] protested, and had him kicked out of the cafe, he smashed her car windows.”

Despite that chaos, Haidary persisted because she wanted to be an inspiration to other women in Afghanistan. “Even when the going got tough, I didn’t quit. Not only did I need this to support Mother Camp, but I also wanted to show to our society that a woman can run a successful business,” she says.

The social change, however, will have to be gradual, and Afghan society will need more time to accept working women, especially in the service sector, as a norm. That said, women have come by leaps and bounds, having survived many wars and the brutal and patriarchal Taliban regime, during which they couldn’t even step out of their homes without male escorts. They know they’re more than just victims—they’re survivors who are overcoming odds, every day.

Ruchi Kumar wrote this article for YES! Magazine. Ruchi is an Indian journalist based in Afghanistan covering developmental, cultural, and political stories from the region.