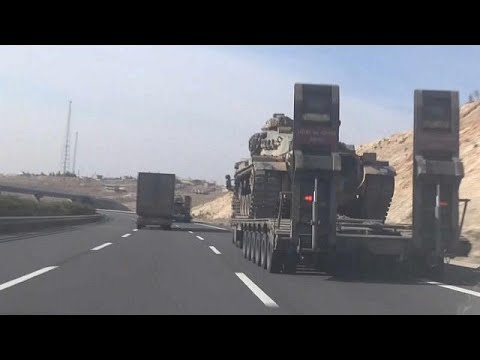 Turkish President Tayyip Erdogan’s angry threat to invade a Syrian Kurdish canton in response to the US announcement that it would train and arm a 30,000-man Syrian Kurdish border force produced anxiety in Moscow. Russia has made a big bet, worth billions of rubles and involving a substantial military investment, on restoring stability in Syria (albeit at the price of propping up the seedy Baath one-party state).

The Russian Federation holds some cards in Syria because of its large military presence and the control of Syrian airspace exercised by its Aerospace Forces. Turkey is clearly afraid that if it launches an air campaign against bases of the leftish YPG militia in Afrin, its planes may be shot down by Russia. Thus, Ankara dispatched the Turkish chief of staff to Moscow yesterday to seek Russian acquiescence in such a set of airstrikes. Observers are taking this mission as a sign that Turkey is deadly in earnest about its announced plans to attack Afrin. Afrin is one of three largely Kurdish cantons in northern Syria, but is isolated from the other two and surrounded on three sides by Arab villages and to the north by Turkey. About 500,000 Kurds live there, out of the 2 million Syrian Kurds.

The Syrian government of Bashar al-Assad, making a play to get the Syrian Kurds back for itself, announced that its MiGs would shoot down any Turkish planes bombing Afrin.

Vladimir Mukhin writes in the centrist daily, Nezavisimaya Gazeta, with some alarm that Turkey’s threats against the Kurds and the US “Syrian Democratic Forces” may be viewed as a signal to Russia, as well. Any Turkish attack on the Kurdish-held enclaves of Afrin and Manbij would, he said, endanger Russian peacekeeping troops. Suggesting that Turkey, like the US, is a spoiler with regard to the reestablishment of order in Syria, he said he found it suspicious that pro-American and pro-Turkish Syrian rebel groups have just announced that they will not attend the Congress of National Dialogue to be hosted by Russia in Sochi.

Andrei Ontikov and Georgy Asatryan writing in the pro-government Izvestia quoted Vladimir Dzhabarov, the first deputy head of the Federation Council’s international affairs committee. Dhzabarov observed that the United States appeared to be disappointed that it had managed to defeat the radical ISIL terrorist group in Syria. (He is implying that Washington is just a spoiler in Syria, actively seeking instability). He accused them of setting up Turkey and the Kurds for an armed clash by arming the latter and by also secretly arming Arab Syrian rebels. He said the US just wants to escalate the conflict. (The US press reported that the Trump administration cancelled a covert CIA program to army Syrian rebels; it is true, however, that some US-supplied arms went from moderate, Muslim Brotherhood rebels to extremists linked to al-Qaeda).

Fyodor Lukyanov writing in the state-owned daily Rossiyskaya Gazeta, cast doubt on Erdogan’s earnestness. He said the Turkish president is likely bluffing and signalling as hard as he can that he dislikes Washington’s policy of arming the Syrian Kurds. He said that in any case Russia is “standing aside,” though it is very worried, since it has committed a great deal to the cause of national reconciliation in Syria.