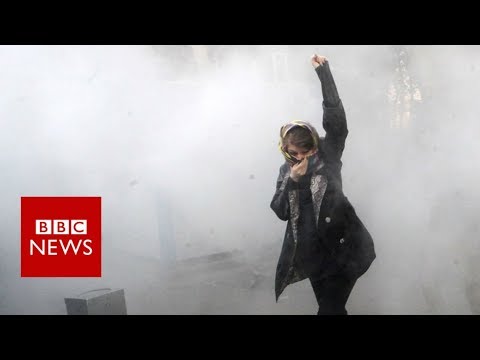 Halt Use of Excessive Force Against Demonstrators

So far, the official news channels of the Islamic Republic of Iran Broadcasting (IRIB) have confirmed the deaths of at least 21 people including two security officers during the protests and clashes with security forces over the past five days. The protests began on December 29, 2017, in the city of Mashhad and have spread to more than a dozen cities in Iran.

“The rising death toll bodes ill for Iranians who are daring to take their grievances to the streets,” said Sarah Leah Whitson, Middle East director at Human Rights Watch. “Rather than issue barely veiled threats against protesters, the authorities should investigate these deaths, ensure the rights of all detainees, and guarantee that people can protest freely and peacefully.”

Police have confirmed the arrests of more than 550 people in the Tehran, Razavi Khorasan, and Markazi provinces.

Intelligence authorities have also arrested a number of activists during the past few days.

On January 1, Mashahalh Nemati, governor of Dorood, a city in Lorestan province, confirmed the deaths of four residents during clashes there on December 29 and 30. He also described an incident on December 30 in which he claimed a 12-year-old boy and his father were killed when a fire engine taken over by rioters hit their car. He said the rioters later abandoned the fire engine.

On the same day, Hedayatollah Khademi, a member of parliament from the city of Izeh in Khuzistan province, told ILNA news agency, the Iranian Labor News Agency, that two people had died in “unrest” in the city on December 31, but that he could not confirm their causes of death. Khademi also denied allegation on social media that people had occupied government buildings.

Social media accounts said that the police shot and killed Masoud Kiani Ghale Sardi, a protester in the city of Izeh. Human Rights Watch has not been able to confirm those accounts.

Saeed Shahrokhi, the political deputy to the governor of Hamedan province, told IRIB that three protesters were killedin the city of Tuyserkan.

On January 1, the Guild Association for university students reported that four members of its board who had participated in a meeting with the head of the University of Tehran to negotiate the release of students arrested during a December 31 protest had been briefly detained.

On December 30, Communications Minister Azarei Jahromi told Telegram and Twitter to shut down news channels that he alleged were distributing materials inciting violence. A few hours later, Pavel Durov, the CEO of Telegram, announced that Telegram had suspended the Amadnews channel for allegedly instructing subscribers to use Molotov cocktails against police. However, a few hours later, IRIB news agency announced that authorities would temporarily block the popular social media application Instagram and Iran’s most popular messaging application Telegram.

In 2009, Iranian authorities violently repressed protesters who took to the street to protest the outcome of the presidential election, resulting in dozens of deaths in the streets and in detention centers. The Iranian authorities also arrested hundreds of activists and sentenced them to long prison sentences after unfair trails.

Iranian authorities have a responsibility not only to ensure public safety, but also to ensure people’s right to peaceful assembly and to free access to information, Human Rights Watch said.

“Blocking the popular cellphone applications Telegram and Instagram is yet another over-the-top response to people raising grievances against systematic corruption and repression,” Whitson said. “Iranian authorities should change their addiction to repression and allow people to speak and demonstrate.”

BBC News: “Iran protests: Why people are taking to the streets – BBC News”