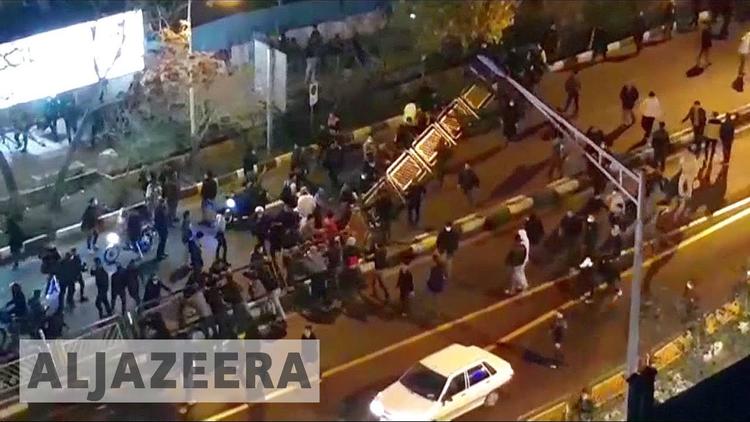 By Josepha Ivanka Wessels | (The Conversation) | – –

Roiling more than a dozen major cities, young Iranians are protesting against the country’s government. They appear to be particularly angered by the country’s funding of wars in Arab countries, such as Yemen and Syria, as Iranian citizens slide towards poverty. In the city of Kerman, demonstrators chanted that the “People are living like beggars, the Leader is behaving like a God”, and in Khuzestan, protesters reportedly called out “death to Khamenei”, Iran’s supreme leader. Something profound is happening – and it could have major implications for the Middle East as a whole.

On the face of it, this is reminiscent of the huge protests that followed the 2009 election, known as the Green Movement or Green Revolution. But these latest protests are all round very unlike the Green Movement in their implications, their size, and their demographics. In 2009, protesters mainly came from a young and educated middle class; this time, the protests started in the north-western city of Mashad, traditionally a religiously conservative place, and those taking to the streets come from a far wider variety of backgrounds.

Alas, much as happened in 2009, the latest protests in Iran face a severe government crackdown. The first deaths at the hands of security forces were reported in Dorud, and more than 20 casualties have now been counted. And yet the protesters continue to stand up against the government’s iron-fisted approach. So what’s driving them?

Besides the protesters’ explicit antipathy toward Iranian foreign policy in the Arab world, the protests also have a distinctively Arab dimension. In Ahwazi, a majority Arab region in Iran’s south-west, protests have been going on for weeks, with people taking to the streets to rail against the Iranian government’s repression and its confiscation of Ahwazi land and water. Thousands of Arab Iranians took to the streets when an Iranian parliamentarian, Qassem al-Saeedi, slammed the Iranian government’s discriminatory policies, even comparing the Iranian regime’s anti-Arab policies to those of Israel.

Then there’s the matter of Syria. Since the beginning of the Syrian uprisings in 2011, Ahwazi Arab Iranians have stood in solidarity with their counterparts on the Syrian streets, while Syrian pro-democracy protesters have waved the Ahwaz flag in their protests against Bashar al-Assad’s regime. Small wonder then that today’s Syrian anti-regime revolutionaries and activists are standing in solidarity with the Iranian protests.

Abdelaziz al-Hamza, a Syrian pro-democracy activist from Raqqa and active member of the group Raqqa is Being Slaughtered Silently, advised the Iranian protesters not to reveal their identity, not to carry any ID documentation, and to use removable memory cards in the devices they use to document the protests. He also strongly advised them to use nicknames for their Facebook, Twitter and YouTube accounts, and to communicate via encrypted apps.

Many Syrian opposition activists hope that the Iranian protests will start a domino effect that eventually affects Iranian foreign policy towards Syria. In recent years, the Iranian government has spent billions of dollars annually supporting the repressive Syrian regime. Iran’s powerful military chief, General Qasem Soleimani, has been leading the Iranian military operation inside Syria. If the current protests lead to some sort of revolutionary change, Iran’s strong financial and military support to active actors in the Syrian war – among them Hezbollah and the Assad regime’s army – could suddenly shrivel up. This will also have major implications for Arab countries where Iran is playing a military role, not least Yemen.

If anything is to be learned from the Syrian uprisings, it’s that protests such as these can take on a life of their own in ways no one anticipated. There is a significant chance that the Iranian regime will be every bit as brutal in its crackdown as the Assad regime. Ayatollah Ali Khamenei has blamed the protests on a foreign conspiracy; hundreds of protesters have been arrested, and the head of Iran’s Revolutionary Court warned that some will receive death sentences.

The prospect of major bloodshed at the hands of the state looms large – and if that happens, the ensuing domino effect could create yet another volatile and explosive situation in an already stormy and dangerous region.