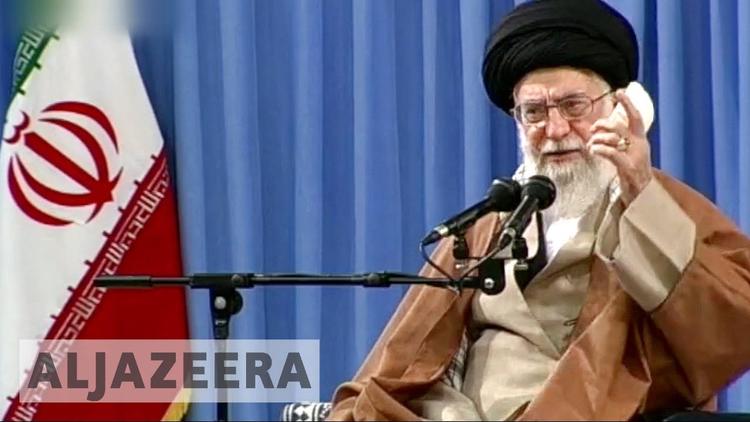 Iran’s clerical leader, Ali Khamenei, gave a speech in Qom on Tuesday, in which he warned Donald Trump that his “crazy games” would not go without a response. Western news outlets such as the NYT tried to represent this speech as a threat, and some outlets translated “crazy” as “psychotic” in search of hyperbole. As usual, if an unfriendly government warns Washington not to interfere in its affairs, that is interpreted as an aggressive threat against Washington.

Iran is awaiting a decision from the Trump administration on sanctions that could destroy the JCPOA or nuclear deal. American hardliners have called for ratcheting up sanctions on Iran, instead of, as the deal requires, reducing them.

Khamenei said that recent events were the result of the anger and sense of defeat among American officials. He denied that the Iranian government was panicked, and noted that it had been cool-headed enough to kick the US out of Iran and then more recently to kick it out of the Middle East.

He said that the American leader (Trump) is admitted by the Americans themselves to be unbalanced psychologically, and warned that his crazy games would not go without a reply. He said that if the US again tried to interfere in Iran, it would fail again.

He also said Americans had no standing to criticize Iran for repressing violent protests, given that US police killed 800 people last year. (Actually many of the protests in Iran were not violent, and actually two wrongs don’t make a right).

Over twenty Iranian protesters were killed in the past few weeks and hundreds or perhaps thousands were arrested.

Khamenei said that the US analysis of Iran as an oppressive government is wrong and that the Islamic Republic derives from the people of Iran themselves. (If he is now admitting the principle of poplar sovereignty, then he should stop excluding liberal candidates from running and let the people decide).

He dismissed the violent protesters in recent weeks as saboteurs and tools of the devil and foreign agents, speaking of a conflict between the “nation” and the “anti-nation,” “Iran” and “anti-Iran,” and “Islam” and “anti-Islam,” which he said was destined to continue. It is striking how close this diction is to that of ancient Zoroastrian Iran, where people spoke of Iran and non-Iran in a dualistic way. He blamed the United States and the UK for their steadfast opposition to the Islamic Republic and ridiculed counter-revolutionary Iranians resident in London.

Despite beginning with this dismissive tone, he took a leaf from elected President Hassan Rouhani’s book, going on to say that a firm distinction must be made between the legitimate demands of peaceful protesters and the mindless destruction of others, and that the demands of the former must be taken seriously. It was a small (very small) olive branch to the protesters from the head of the hard line faction.

He accused the more hooligan-like protesters of cursing Islam and the Qur’an and of burning the Iranian flag. You wonder if he’s giving away more than he realizes.

He blamed the protests on 1) the US and Israel, 2) Saudi Arabia, and ) the Mojahedin-e Khalq or MEK cult, which has cooperated with Saddam Hussein and the American right wing in hopes of overthrowing the current government and implementing their vision of “Islamic Marxism.”

Needless to say, crowds protesting the price of eggs in Quchan had nothing to do with any of these, and Khamenei is just slandering the protesters.