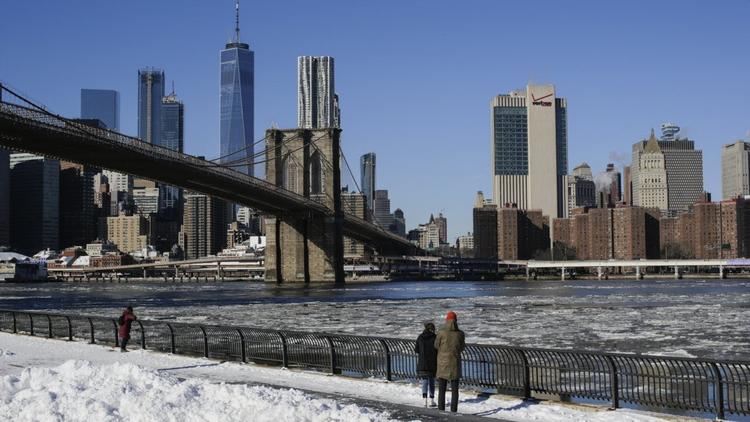 “We are taking the largest action by any city to confront the growing climate crisis and demonstrate the leadership necessary to win this fight against fossil fuels and the damages they’ve caused.”

Climate advocates hailed what they say is a “watershed” moment on Wednesday following two announcements by New York City: that the city would seek to divest its pension funds from fossil fuels within five years, and that it filed suit against five fossil fuel giants for their role in driving the climate crisis.

“This is a first-in-the-nation step to protect our future and our planet—for this generation and the next,” said Comptroller Scott M. Stringer.

“Today’s announcement is a rallying signal to cities all over the world that the dawn of a fossil free world has arrived.”
—Betámia Coronel, 350.orgStringer announced last month that he would soon bring a proposal to the trustees of the pension funds that included divestment. Following through on that promise, a statement from the city released Wednesday says that he and Mayor Bill de Blasio “will submit a joint resolution to pension fund trustees” to begin the steps needed to purge the funds from the dirty industry, which will first entail an analysis on the financial impacts to be carried out by the City Comptroller’s Bureau of Asset Management.

350.org co-founder Bill McKibben said in a tweet responding to the news that it was “One of the biggest days in 30 years of the climate fight.”

One of the biggest days in 30 years of the climate fight: NYC announces it will divest giant pension fund and sue the oil companies for damages. Earth’s mightiest city now in full-on fight with its richest, most irresponsible industryhttps://t.co/iFakWojmgr

The city’s five pension funds hold $189 billion in assets, and roughly $5 billion of that amount are held in the securities of over 190 fossil fuel companies, the city says.

The new lawsuit names BP, Chevron, ConocoPhillips, Exxon Mobil, and Royal Dutch Shell and seeks billions of dollars in damages for harm already inflicted on the city as a result of the climate crisis as well for preparing for effects yet to come, including “imminent threats to its property, its infrastructure, and the health and safety of its residents.”

The city’s statement references the industry’s deliberate misinformation campaign to cover up the effects of fossil fuels.

“We’re bringing the fight against climate change straight to the fossil fuel companies that knew about its effects and intentionally misled the public to protect their profits,” de Blasio said in a statement. “As climate change continues to worsen, it’s up to the fossil fuel companies whose greed put us in this position to shoulder the cost of making New York safer and more resilient.”

Daniel Zarrilli, the city’s senior director of Climate Policy and Programs and Chief Resilience Officer, echoed that statement, saying, “Today, after a decades-long pattern of deception and denial by fossil fuel companies, New York City is holding them to account. By seeking damages for the investments necessary to protect New Yorkers from the impacts of climate change, and divesting our pension funds from fossil fuel reserves, we are taking the largest action by any city to confront the growing climate crisis and demonstrate the leadership necessary to win this fight against fossil fuels and the damages they’ve caused.”

Among the state lawmakers praising the city’s action was Democratic Sen. Liz Krueger who said, “Divestment sends the clear message that it is no longer acceptable to support companies whose fundamental business model puts our entire society at risk.”

Climate campaigners heaped praise on the city as well.

McKibben said in a statement, “New York City today becomes a capital of the fight against climate change on this planet.”

“With its communities exceptionally vulnerable to a rising sea, the city is showing the spirit for which it’s famous: it’s not pretending that working with the fossil fuel companies will somehow save the day, but instead standing up to them, in the financial markets and in court,” he added.

The announcements also drew praise from Carroll Muffett, president of Center for International Environmental Law (CIEL), who said they marked “a watershed in corporate accountability for climate change and a wake-up call to investors that the risks facing fossil fuel companies are real, material, and rapidly growing.”

The city’s move also follows New York State’s announcement last month that it was putting forth a “a de-carbonization roadmap” that included divesting from fossil fuels.

With NYC becoming the first major U.S. city to call for divestment—a call over 800 institutions have heeded—and a growing number of municipalities filing suit against the industry, climate activists say it’s clear “the global tide is turning.”

BREAKING: NYC will divest its $191B pension funds from fossil fuels and today will announce lawsuit for damages from climate change!
This is just the beginning. The global tide is turning. #FossilFree #DivestNY https://t.co/BzvaEZMuLj

According to Betámia Coronel, U.S. reinvestment coordinator at 350.org, “Divesting our city’s pensions from the dirtiest companies is an enormous hard-won first step; holding companies like Exxon accountable for their role in climate deception is next. Today’s announcement is a rallying signal to cities all over the world that the dawn of a fossil free world has arrived.”

“The signal is clear,” McKibben adds in an op-ed. “The oil industry is not the future, it’s the past. And indeed it will be held responsible for what it’s done in the past: namely, push climate denial when it knew the truth.”

“They should light up the Empire State Building in green tonight — for the money the city is going to save, and for the planet it will help protect in the process,” he concludes.