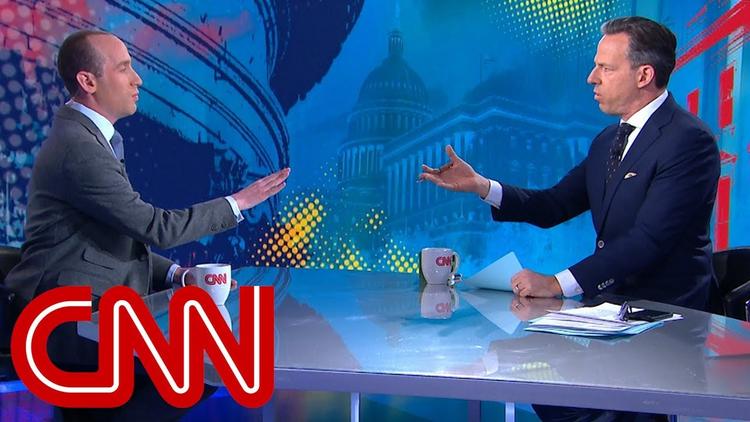 Miller declined to leave after the train wreck of an interview, in which he accused Tapper of gloating over the revelations in the Wolff book and attempted to portray Tapper as an out of touch East Coast elite journalist unable to understand the discontents of the US working class.

CNN building security allegedly had to come and physically remove Miller from the studio. (I’ve done a lot of television, and the issue here is that if the guest doesn’t leave the desk after the segment ends, he’ll be in the next shot as well, and still will have the microphone).

Miller serves an administration staffed by billionaires who just stole $1.5 trillion from the working and middle classes and gave it to the . . . billionaires, attempting to kick 26 million workers off of health insurance.

Miller insisted on delivering a set of long speeches praising Trump’s political genius instead of answering any specific questions, and attempted to erase his mentor Steve Bannon from the history of the first Trump administration. Tapper characterized the performance as “filibustering.”

Tapper pointed out that Miller has his job on Bannon’s recommendation, and Miller denied it, attaching himself retrospectively to Corey Lewandowski. Both Bannon and Lewandowsky were fired (the latter by Paul Manafort, who was then fired)– likely pointing to Miller’s future fate, which he seems to be attempting to avoid by becoming the universe’s premier brown-noser.*

Miller’s attempt to ventriloquize the working class is sad, given that he is serving the wealthiest administration in American history, and one especially sadistic toward the working and middle classes. Two-thirds of Trump voters make over $50,000 a year. WaPo reported that “white non-Hispanic voters without college degrees making below the median household income made up only 25 percent of Trump voters.” A third of Trump voters, in contrast, make over $100,000 a year. Trump’s base is wealthy, which is why his policies are rewarding the wealthy. It is true that 70% of Trump voters don’t have a college degree, but 70% of Republicans don’t have a college degree, and a lot of those people are very well off.

Most working class people don’t vote at all, and the majority of them reliably vote Democratic when they do go to the polls. Pro-Trump white factory workers exist, but they are a minority of their social class and trying to portray Trump as a champion of the working class is just propaganda. It is true that members of the white working class mainly driven by financial distress voted for Hillary Clinton, while the minority of that class who voted for Trump tend to dislike foreigners.

Miller again blamed immigrants for taking jobs from working class whites, which is a false argument. Immigrants most often don’t have the skills to compete in the same market with the working class, and tend to do menial jobs or jobs locals decline to do, as with picking strawberries. Their labor brings down prices for working class consumers. There are also high-income immigrants in e.g. the tech world, who often make discoveries and form companies that expand the economy and create working class jobs.

Miller used his appearance not to answer questions about the goings-on in the White House or even effectively to refute Wolff’s book (a denial and character attack is not an argument), but to broadcast his racist poison to millions of people. Corporate news really shouldn’t be giving him a platform, since he uses it to normalize Neo-Nazism. His epithet on social media is “Baby Goebbels,” referring to the National Socialist propagandist.

“1939, American English colloquial, said to be military slang originally, from brown (adj.) + nose (n.), ‘from the implication that servility is tantamount to having one’s nose in the anus of the person from whom advancement is sought’ [Webster, 1961]. Related: Brown-noser, brown-nosing (both 1950).”