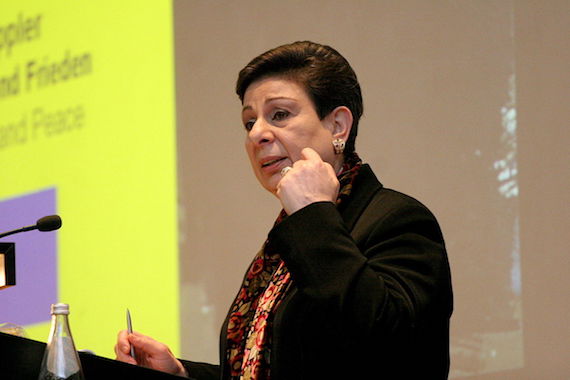 In a statement Hanan Ashrawi, a member of the Palestinian Liberation Organization’s Executive Committee, condemned Trump’s decision last month to recognize Jerusalem as the “capital” of Israel and move the U.S. embassy from Tel Aviv to the occupied city.

“We will not be blackmailed,” Ashrawi said. “By recognizing Occupied Jerusalem as Israel’s capital, Donald Trump has not only violated international law, but he has also single handedly destroyed the very foundations of peace and condoned Israel’s illegal annexation of the city.”

Her comments came less than a day after Trump tweeted that his government gives the Palestinians “HUNDRED OF MILLIONS OF DOLLARS a year and get no appreciation or respect.

They don’t even want to negotiate a long overdue peace treaty with Israel … with the Palestinians no longer willing to talk peace, why should we make any of these massive future payments to them?”

His tweet echoed comments made earlier Tuesday by his ambassador to the United Nations Nikki Haley who threatened to cut funding for the U.N. Relief and Works Agency, which provides aid to millions of Palestinian refugees.

The U.S. president “sabotaged our search for peace, freedom and justice. Now he dares to blame the Palestinians for the consequences of his own irresponsible actions!” Ashrawi added.

“He doesn’t want to give any additional funding until the Palestinians agree to come back to the negotiation table, and what we saw with the resolution was not helpful to the situation.”

UNRWA spokesman Chris Gunness told Reuters Wednesday “UNRWA has not been informed by the United States administration of any changes in U.S. funding to the Agency.” Trump’s threats were welcomed by Israeli far-right politicians who are against a Palestinian state.

The United States is the largest donor to the agency, with a pledge of nearly US$370 million as of 2016, according to UNRWA’s website.

According to UNRWA’s website, there are 5.9 million UNRWA refugees and other registered Palestinian people eligible for its services, which include education and health care, in the West Bank, the Gaza Strip, Jordan, Lebanon and Syria.