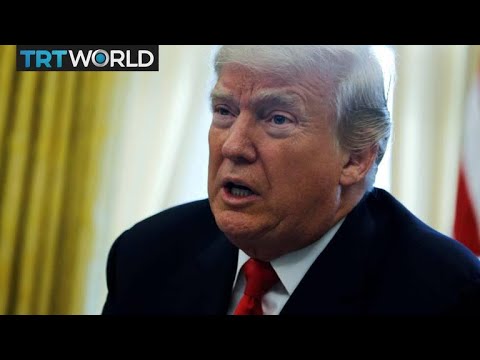 Trump defended, in a meeting with Israeli Prime Minister Benjamin Netanyahu at the World Economic Forum in Davos, Switzerland, his decision to recognize Jerusalem as capital of Israel, and said that hundreds of millions of dollars in US aid are not going to the Palestinians “unless they sit down and negotiate peace.”

Nabil Abu Rudeineh, spokesman for PA President Mahmoud Abbas, told reporters in Ramallah that the US “policy of threats, starvation and capitulation will not work with the Palestinian people.”

“The issue of Jerusalem is a sacred one. It is the key to war and peace in the region. It is not for sale with all the money in the world and the threat of cutting aid to UNRWA is totally unacceptable,” he said, according to WAFA.

Abu Rudeineh was referring to the US decision, earlier this month, to cut $65 million from the US annual contribution to the United Nations Relief and Works Agency for Palestine Refugees to punish the Palestinians for refusing to accept the US and Israeli conditions for negotiations that include taking Jerusalem off the negotiating table.

Abu Rudeineh reiterated the Palestinian commitment to peace based on United Nations General Assembly and Security Council resolutions, as well as the decisions of the Arab summits and the Arab Peace Initiative that support the two-state solution for establishing an independent Palestinian state on the 1967 borders, with East Jerusalem as its capital.

“Unless the US administration retracts its decision regarding the occupied city of Jerusalem, it will have no role in the peace process. If Jerusalem is off the table, then the US will be off the table as well,” he stressed.

“President Trump’s statement only reaffirms that the US has disqualified itself from playing a role in achieving peace. His comments on Jerusalem should serve as a wakeup call for Arab leaders and decision makers, as well as to the rest of the world,” he said in a statement.

“Jerusalem is not off the negotiations table; rather the US is outside the international consensus. Those who say that Jerusalem is off the table are saying that peace is off the table. The holy city is in the hearts of each and every Palestinian, Arab, Christian and Muslim, and there will be no peace without East Jerusalem being the sovereign capital of the State of Palestine.”

Erekat added, “Today’s message is clear: President Trump is blackmailing and punishing the Palestinian people for fighting and believing in their freedom and human rights per international law and UN resolutions. President Trump could buy many things with his money, but he won’t be able to buy the dignity of our nation.”

“This is not a game for the people of Palestine. It is about our very existence that continues to be denied by Israel with full US support. As the US Administration insists to continue promoting international anarchy and rewarding violations of international law, we will continue to use all available political, diplomatic and legal venues in order to achieve the long overdue rights of the Palestinian people, most importantly our right to self-determination.”