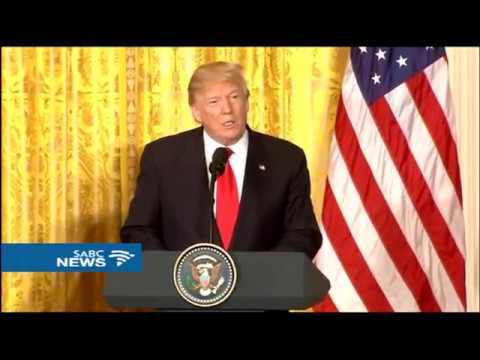 George Orwell warns us in his dystopian novel 1984 that authoritarianism begins with language. In the novel, “newspeak” is language twisted to deceive, seduce and undermine the ability of people to think critically and freely.

Donald Trump’s unapologetic bigoted language made headlines again Thursday when it was reported he told lawmakers working on a new immigration policy that the United States shouldn’t accept people from “shithole countries” like Haiti. Given his support for white nationalism and his coded call to “Make America Great (White) Again,” Trump’s overt racist remarks reinforce echoes of white supremacy reminiscent of fascist dictators in the 1930s.

His remarks about accepting people from Norway smack of an appeal to the sordid discourse of racial purity. There is much more at work here than a politics of incivility. Behind Trump’s use of vulgarity and his disparagement of countries that are poor and non-white lies the terrifying discourse of white supremacy, ethnic cleansing and the politics of disposability. This is a vocabulary that considers some individuals and groups not only faceless and voiceless, but excess, redundant and subject to expulsion. The endpoint of the language of disposability is a form of social death, or even worse.

As authoritarianism gains strength, the formative cultures that give rise to dissent become more embattled, along with the public spaces and institutions that make conscious critical thought possible.

Words that speak to the truth to reveal injustices and provide informed critical analysis begin to disappear, making it all the more difficult, if not dangerous, to judge, think critically and hold dominant power accountable. Notions of virtue, honour, respect and compassion are policed, and those who advocate them are punished.

I think it’s fair to argue that Orwell’s nightmare vision of the future is no longer fiction in the United States. Under Trump, language is undergoing a shift: It now treats dissent, critical media coverage and scientific evidence as a species of “fake news.”

The Trump administration, in fact, views the critical media as the “enemy of the American people.” Trump has repeated this view of the media so often that almost a third of Americans now believe it and support government-imposed restrictions on the media, according to a Poynter survey.

Trump’s cries of “fake news” work incessantly to set limits on what is thinkable. Reason, standards of evidence, consistency and logic no longer serve the truth, according to Trump, because the latter are crooked ideological devices used by enemies of the state. Orwell’s “thought crimes” are Trump’s “fake news.” Orwell’s “Ministry of Truth” is Trump’s “Ministry of Fake News.”

The notion of truth is viewed by this president as a corrupt tool used by the critical media to question his dismissal of legal checks on his power, particularly his attacks on judges, courts and any other governing institutions that will not promise him complete and unchecked loyalty.

For Trump, intimidation takes the place of unquestioned loyalty when he does not get his way, revealing a view of the presidency that is more about winning than about governing.

One consequence is the myriad practices by which Trump gleefully humiliates and punishes his critics, wilfully engages in shameful acts of self-promotion and unapologetically enriches his financial coffers.

Under Trump, the language of civic literacy and democracy has become unmoored from critical reason, informed debate and the weight of scientific evidence, and is now being reconfigured and tied to pageantry, political theatre and a deep-seated anti-intellectualism.

One consequence, as language begins to function as a tool of state repression, is that matters of moral and political responsibility disappear and injustices proliferate.

What is crucial to remember here, as authoritarianism expert Ruth Ben-Ghiat notes, is that fascism starts with words. Trump’s use of language and his manipulative use of the media as political spectacle are disturbingly similar to earlier periods of propaganda, censorship and repression.

Under fascist regimes, the language of brutality and culture of cruelty was normalized through the proliferation of strident metaphors of war, battle, expulsion, racial purity and demonization.

As German historians such as Richard J. Evans and Victor Klemperer have made clear, dictators like Adolf Hitler did more than simply corrupt the language of a civilized society, they also banned words.

Soon afterwards, the Nazis banned books and the critical intellectuals who wrote them. They then imprisoned those individuals who challenged Nazi ideology and the state’s systemic violations of civil rights.

The end point was an all-embracing discourse of disposability — the emergence of concentration camps and genocide fuelled by a politics of racial purity and social cleansing.

Echoes of the formative stages of such actions are upon us now. An American-style neo-fascism appears to be engulfing the United States after simmering in the dark for years.

More than any other president, Trump has normalized the notion that the meaning of words no longer matters, nor do traditional sources of facts and evidence. In doing so, he has undermined the relationship between engaged citizenship and the truth, and has relegated matters of debate and critical assessment to a spectacle of bombast, threats, intimidation and sheer fakery.

This language of fascism does more than normalize falsehoods and ignorance. It also promotes a larger culture of short-term attention spans, immediacy and sensationalism. At the same time, it makes fear and anxiety the normalized currency of exchange and communication.

In a throwback to the language of fascism, Trump has repeatedly positioned himself as the only one who can save the masses — reproducing the tired script of the model of the saviour endemic to authoritarianism.

There is more at work here than an oversized ego. Trump’s authoritarianism is also fuelled by braggadocio and misdirected rage as he undermines the bonds of solidarity, abolishes institutions meant to protect the vulnerable and launches a full-fledged assault on the environment.

Trump is also the master of manufactured illiteracy, and his obsessive tweeting and public relations machine aggressively engages in the theatre of self-promotion and distractions. Both of these are designed to whitewash any version of a history that might expose the close alignment between his own language and policies and the dark elements of a fascist past.

Trump also revels in an unchecked mode of self-congratulation bolstered by a limited vocabulary filled with words like “historic,” “best,” “the greatest,” “tremendous” and “beautiful.”

Those exaggerations suggest more than hyperbole or the self-indulgent use of language. When he claims he “knows more about ISIS than the generals,” “knows more about renewables than any human being on Earth” or that nobody knows the U.S. system of government better than he does, he’s using the rhetoric of fascism.

As the aforementioned historian Richard J. Evans writes in The Third Reich in Power:

“The German language became a language of superlatives, so that everything the regime did became the best and the greatest, its achievements unprecedented, unique, historic and incomparable …. The language used about Hitler … was shot through and through with religious metaphors; people ‘believed in him,’ he was the redeemer, the savior, the instrument of Providence, his spirit lived in and through the German nation…. Nazi institutions domesticated themselves [through the use of a language] that became an unthinking part of everyday life.”

Under the Trump regime, memories inconvenient to his authoritarianism are now demolished in the domesticated language of superlatives so the future can be shaped to become indifferent to the crimes of the past.

Trump’s endless daily tweets, his recklessness, his adolescent disdain for a measured response, his unfaltering anti-intellectualism and his utter ignorance of history work in the United States. Why? Because they not only cater to what historian Brian Klaas refers to as “the tens of millions of Americans who have authoritarian or fascist leanings,” they also enable what he calls Trump’s attempt at “mainstreaming fascism.”

The language of fascism revels in forms of theatre that mobilize fear, hatred and violence. Author Sasha Abramsky is on target in claiming that Trump’s words amount to more than empty slogans.

Instead, his language comes “with consequences, and they legitimize bigotries and hatreds long harbored by many but, for the most part, kept under wraps by the broader society.”

Surely, the increase in hate crimes during Trump’s first year of his presidency testifies to the truth of Abramsky’s argument.

The history of fascism teaches us that language operates in the service of violence, desperation and troubling landscapes of hatred, and carries the potential for inhabiting the darkest moments of history.

It erodes our humanity, and makes too many people numb and silent in the face of ideologies and practices that are hideous acts of ethical atrocity.

Trump’s language, like that of older fascist regimes, mutilates contemporary politics, empathy and serious moral and political criticism, and makes it more difficult to criticize dominant relations of power.

His fascistic language also fuels the rhetoric of war, toxic masculinity, white supremacy, anti-intellectualism and racism. But it’s not his alone.

It is the language of a nascent fascism that has been brewing in the United States for some time. It is a language that is comfortable viewing the world as a combat zone, a world that exists to be plundered and a view of those deemed different as a threat to be feared, if not eliminated.

A new language aimed at fighting Trump’s romance with fascism must make power visible, uncover the truth, contest falsehoods and create a formative and critical culture that can nurture and sustain collective resistance to the oppression that has overtaken the United States, and increasingly many other countries.

No form of oppression can be overlooked. And with that critical gaze must emerge a critical language, a new narrative and a different story about what a socialist democracy will look like in the United States.

Reclaiming language as a force for good

There is also a need to strengthen and expand the reach and power of established public spheres, such as higher education and the critical media, as sites of critical learning.

We must encourage artists, intellectuals, academics and other cultural workers to talk, educate, make oppression visible and challenge the common-sense vocabulary of casino capitalism, white supremacy and fascism.

Language is not simply an instrument of fear, violence and intimidation; it is also a vehicle for critique, civic courage and resistance.

A critical language can guide us in our thinking about the relationship between older elements of fascism and how such practices are emerging in new forms.

Without a faith in intelligence, critical education and the power to resist, humanity will be powerless to challenge the threat that fascism and right-wing populism pose to the world.

Those of us willing to fight for a just political and economic society need to formulate a new language and fresh narratives about freedom, the power of collective struggle, empathy, solidarity and the promise of a real socialist democracy.

We would do well to heed the words of the great Nobel Prize-winning novelist, J.M. Coetzee, who states in a work of fiction that “there will come a day when you and I will need to be told the truth, the real truth ….no matter how hard it may be.”

Democracy, indeed, can only survive with a critically informed and engaged public attentive to a language in which truth, rather than lies, become the currency of citizenship.