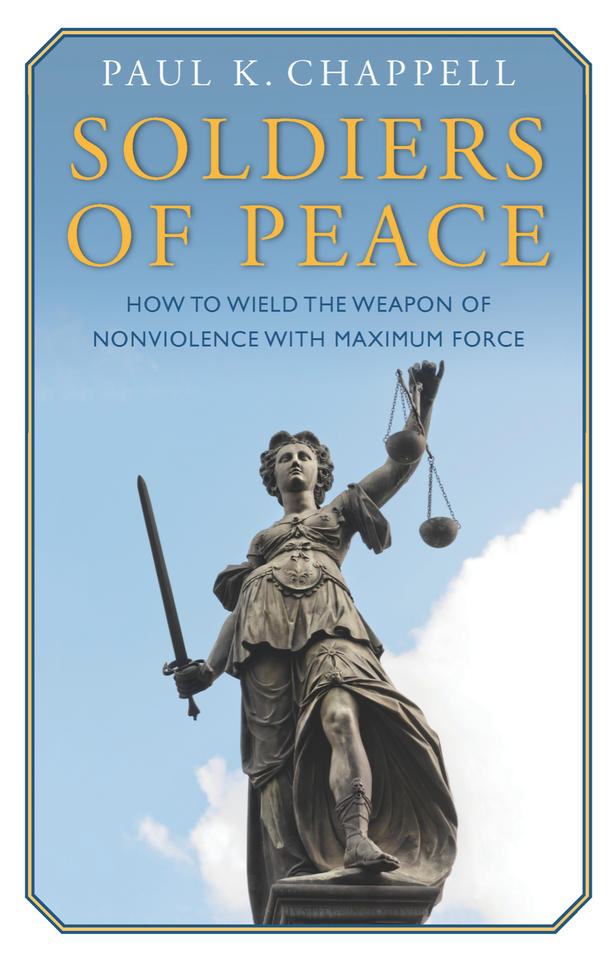 Author and prominent peace educator Paul Chappell observed that he had 12 years of math through calculus II, and yet uses only a fraction of his math skills in daily life. He graduated from high school, however, illiterate in peace, literacy he desperately needed and has dedicated his life to cultivating, disseminating and incorporating into educational curricula.

The author’s childhood was filled with trauma. As a mixed race, Korean/African-American/white child growing up in Alabama, he felt himself a racial outcast. By high school, as he readily admits, he was full of rage. But in an act of survival at the age of 19, he made a solemn commitment to transform himself. He reflects with irony and regret that “the education system had not given me a single hour of training to help me understand the nature of rage. … In fact, much of what I learned in school taught me to suppress my empathy and conscience and to view purpose in the narrow context of accumulating material wealth.”

What we are offered in Chappell’s most recent book, “Soldiers of Peace,” is a strategic and skillful path to radical empathy with fellow humans, within community and in society. It is the sixth in his seven-book series, “The Road to Peace,” a trove of insight and strategy for peace activism burnished by wisdom and compassion.

Chappell writes with a singular style shaped by the directness of his engineering and military training at West Point, fused with imaginative metaphor and lessons drawn from Greek mythology and early classics. “Soldiers of Peace” is organized around a guiding constellation of stars: struggle, training, truth and strategy.

Waging peace is never passive, he writes—it is an unremitting quest in which we humans struggle against “violence, trauma and injustice in our personal lives, communities and throughout the world.” Otherwise, to paraphrase Edmund Burke, evil triumphs when good people do nothing. Peace is achieved only when strategic struggle for social, economic and political justice is fueled by “purpose, meaning, understanding, justice and gentleness.”

Training in peace literacy is as crucial as learning reading, writing and mathematics, and it cannot be left only to parents, Chappell cautions. Schools must teach the history of strategic campaigns that won civil rights and women’s rights; the arts of listening, asking questions to achieve clarity and understanding, cultivating empathy and mutual communication; the skills of disciplined resolution of conflict, and recognizing verbal and advertising manipulation. As Gandhi avowed, “If peace schooling were taken as seriously as military schooling, our world would be a much different place.” Therein lies the core message of this book.

The chapter on the star of strategy is the most complex and crowns the book. “Waging peace,” Chappell writes, “gave me a strategy for living that rage could not give me … to channel the motion of time … to achieve maximum intended impact.” His mentors are eminent revolutionary strategists, such as Martin Luther King, Gandhi and the feminists who won suffrage and human rights for women, and they live in these pages. All were convinced that nonviolence was the most effective way in principle and in strategy to gain freedoms and rights. Gandhi realistically admitted the exception of self-defense as a last resort against a much stronger opponent, with the author giving the example of a woman using self-defense against a rapist. In reflecting on the wave of violence between Hindus and Muslims after winning independence from Great Britain through nonviolent methods (which continues today in tensions between nuclear-armed India and Pakistan), Gandhi acknowledged, “We were simply obliged to be nonviolent while we had violence in our hearts.” Be the change that we seek—another variation on the core message of this book.

Chappell lays out five questions to ask when people might want to consider using violence to overthrow an oppressive regime or system, using examples from history. Ultimately, though, he returns to the wisdom of Gandhi and King that nonviolence is a more powerful tool than violence. “Violence can kill the liar, the racist, the terrorist”; but it does not kill the “lies that sustain an unjust system, racism, or terrorism. …” He underscores his advocacy for nonviolence with recent landmark research by Erica Chenoweth and Maria Stephan that concludes, “Nonviolence is more likely than violence to defeat a militarily superior adversary.” Their study of movements from 1900-2006 to overthrow dictatorships, expel foreign occupations or achieve self-determination found that nonviolent resistance campaigns were more than twice as successful as violent insurrections with the same goals. And the trend is increasing even in extremely brutal authoritarian conditions.

The strength of Paul Chappell’s work is its realism, bolstered by his personal experience; its unlikelihood coming from someone trained at West Point; and, above all, its grounding in moral development and its appeal to our best selves. What is confounding, though, is his valorizing of the military education and philosophy of West Point, which he credits with teaching him the principles of respect, integrity and honor, without an accompanying critique of military practice, the creep of militarism emanating from those trained like him, and the vast U.S. military empire that cadets are trained to lead. Nor does he acknowledge the sexual exploitation throughout all elite military academies, including West Point, basic training, and in the ranks. The war within is real for women in the military—as dangerous and devastating for many as the wars they are sent to fight.

That said, I place Paul Chappell, who is the peace leadership director at the Nuclear Age Peace Foundation, in the tradition of eminent national and international peace educators and advocates. His book is a unique and challenging contribution to peace literacy.

H. Patricia (Pat) Hynes is a retired environmental engineer and professor of environmental health who worked on such issues as the low-income, multiracial urban environment (including lead poisoning, asthma, integrated pest management, and community gardens). For her work and writing Hynes has won national and regional awards. She directs the Traprock Center for Peace and Justice in western Massachusetts. http://traprock.org