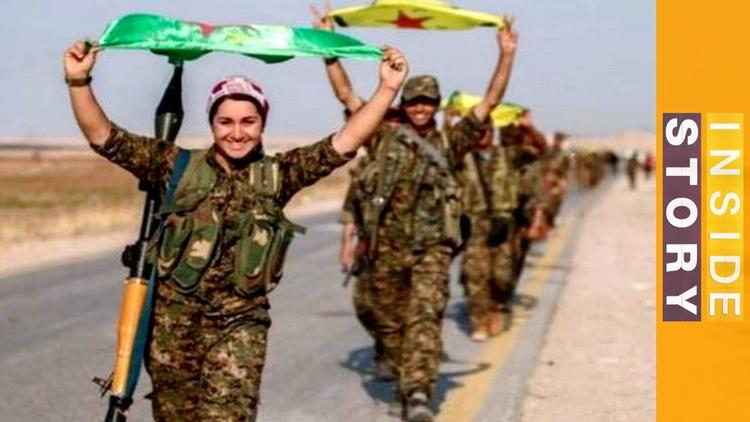 The US announcement that it would form a 30,000 strong policing force in northeast Syria from the YPG leftist Kurdish militia has provoked unprecedently strong words from Turkey, and signs of an unusual convergence of Syrian and Turkish foreign policy objectives. In the cross-hairs are 2,000 US special operations troops embedded with the YPG. The US strategic goal is to block Iranian transfers of men and materiel to Syria and Lebanon via Iraq. In other words, this is another of Donald Trump’s walls. It is meant to please US allies Israel and Saudi Arabia, who lost the Syrian war to Iran and Russia but who want to salvage some strategic goals.

The problem is that this US policy is unpopular not only in Iran, Syria and Lebanon but also in Moscow and Ankara. Let me telegraph that I am afraid that the 2,000 US spec ops troops in northeast Syria are in the same peril that US Marines in Beirut were in in 1983. The radical Islamic Amal group drove a truck bomb into the Marines’ barracks in Beirut in that year, killing hundreds and provoking Ronald Reagan to withdraw from Lebanon (“redeploy offshore” were Reagan’s words). Al-Qaeda leader Usama bin Laden later suggested that this withdrawal convinced him that a strike on the US could push it back out of the Middle East. As good as the Kurdish militiamen are, they can’t stop ISIL remnants or other covert terrorist operations from striking in their territory.

Turkey sees the Syrian Kurds as an affiliate of the Kurdistan Workers Party (PKK) guerrilla group, which both Turkey and the US list as terrorists. The US does not agree.

Turkish President Tayyip Erdogan, who has become increasingly strident and erratic in the past few years, said that the Turkish army was now prepared to intervene in Syria against the new Kurdish border force:

“The operation may start any time. Operations into other regions will come after . . . America has acknowledged it is in the process of creating a terror army on our border. What we have to do is nip this terror army in the bud…” Saying that Turkey’s allies should not dare help what he termed terrorists in Syria, he declared, “We won’t be responsible for the consequences.”

Russia and Syria also condemned the move, alleging that the US is attempting to partition Syria. Any policy helping Kurds move toward more autonomy alarms Syria, Turkey, Iraq and Iran, all of which have significant Kurdish populations they fear could become secessionist. The likelihood is that the Iraqi government also objects, though it isn’t being as vocal as Erdogan and the others. Prime Minister al-Abadi sent Iraqi troops into Kirkuk Province last fall to reassert Baghdad’s authority over the area, also claimed by the now-defeated Kurdistan Regional Government, a superprovince of Iraq itself.

Jordan’s al-Rai (Opinion) newspaper noted that unusual convergence of interests here between Turkey and Syria, both of which feel threatened by Kurdish subnationalism on their territories.

The US military used the Syrian Kurds as ground troops in the fight against ISIL in eastern Syria once it became a serious security concern to Iraq and France from 2014, even though former Secretary of State John Kerry admitted that the US ignored ISIL 2011-2014 because Washington hoped it would weaken the Baath Party state of Bashar al-Assad in Damascus. When Obama and then Secretary of Defense Ash Carter decided to target ISIL in 2014 and after, they could not get allies such as Turkey or Saudi Arabia to change the policy of benign neglect the way the Americans did. Since Obama was reluctant to commit infantry, the only way to defeat ISIL in Syria’s eastern Raqqa and Deir al-Zor provinces was to deploy the eager Syrian Kurdish forces against them. After this campaign proved successful, however, the incoming Trump administration decided to repurpose the US-Kurdish alliance to an attempt to block Iranian logistics.

The People’s Protection Units or YPG are the paramilitary of the Democratic Union Party that dominates Syrian Kurdish politics. They were under Communist influence during the Cold War but from the 1990s and moved toward a form of Left anarchism (though their critics say that their co-ops are actually quite heavy-handed and limit personal freedoms, as well as being racist toward Arabs). There are about 2 million Syrian Kurds, some ten percent of the population, located primarily in the northeast of the country in three geographical cantons, Jazira, Kobane and Afrin. The Kurds, with US air support, managed to kick ISIL out of Kobane and unite it with the Jazira in the northeast. But Afrin is separated from Kobane by a string of Arab towns and villages and by a covert Turkish troop presence. The Kurds would like to unite all three cantons into what they call Rojava. At the least, they want Rojava to have a Quebec-like status as a province of a federal Syrian state with special privileges. Maximalists want independence for it. Turkey is determined to block the extension of Rojava to Afrin and wants to roll back YPG presence in Manbij in northern Syria, which they took from ISIL.

The Syrian Baath Party that came to power in the 1960s is so fanatically Arab nationalist (i.e. racist) that it took citizenship away from large numbers of Syrian Kurds. Not sure what they expected but Kurdish secessionism.

The US special ops forces and the YPG now face a similar difficulty to that of ISIL itself in 2014. None of the regional actors wanted its rise and they combined to destroy it.

Al Jazeera English: “Is Donald Trump ‘playing with fire’ by backing Kurds in Syria ??? | Inside Story”