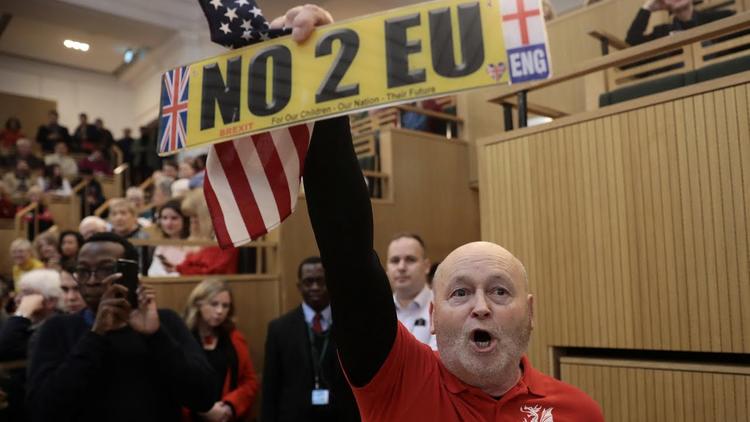 London Mayor Sadiq Khan was about to begin a speech on gender equality to the leftist Fabian Society when he was interrupted by British Trumpist hooligans shouting that they intended to make a citizen’s arrest of the mayor. After a while, during which Khan leafed through some reading material, the police carted off the thugs.

They sported American flags and anti-European Union slogans, and had been enraged by Trump’s cancellation of a planned trip to London, about which Khan remarked that the US president had “gotten the message” that he is unwelcome in the UK. The brown shirts had built a gallows to show that they had an old-fashioned lynching on their minds. Among their leaders was David Russel of the fascist English Defense League. He announced that the name of the group is the Pendragons.

Last June a far-right Briton inspired in part by Trump’s hatred of Muslims rammed his van into a crowd of peaceful worshipers leaving a mosque in London.

After the Trumpist shock troops had been removed, Khan apologized for the delay, occasioned, he said, by “very stable geniuses.”

Apparently no one took the incident very seriously and it provoked a good deal of mirth. But as symbolic politics it is worth dwelling on a little bit.

The deployment of the American flag as an icon of Islamophobia (Khan is a Muslim), bigotry and fascism is extremely disturbing. It is a powerful sign of how Trumpism is rebranding the United States as a country supporting racial hierarchy and hatred for minorities and immigrants.

“Pendragon” is of course the surname of the legendary King Arthur. That sort of medieval romanticism also influenced mass murderer Anders Breivik, who killed 77 Norwegians in 2011. (He targeted Norwegian liberals on the grounds that they did not hate Muslims, a common theme in the fascist Right).

Here are some other twists. The Fabian Society where the mayor was speaking had been founded in the late 19th century by British socialists. Their ranks included George Bernard Shaw the dramatist, science fiction writer H. G. Wells, and Beatrice and Sidney Webb, among many others. They had pushed for workers rights and a more just society, though most of them were from the upper crust. Although Islamophobes attempt to paint Muslims across the board as anti-feminist, that stereotype clearly is not universally true. That a London mayor of Pakistani immigrant heritage is now a guest speaker for the Fabians on women’s rights and was interrupted by the British far right is also symbolic of our current political moment.

Sadiq Khan was right to laugh the very stable geniuses off. But we should keep our eye on the phenomenon of Trumpist brownshirts. Germans used to laugh at Hitler in the 1920s, too.