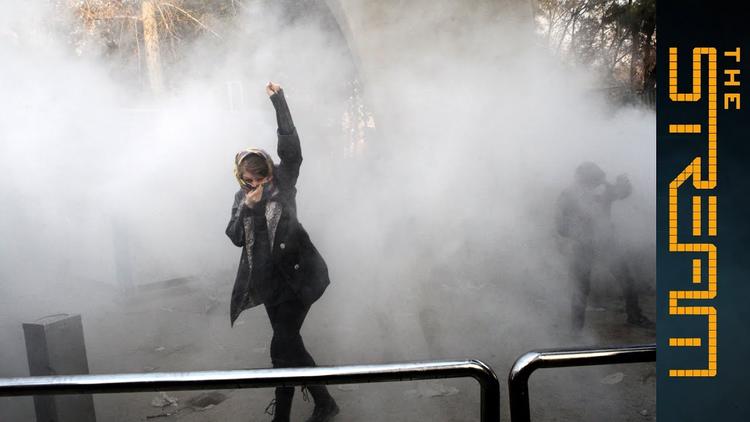 Iran started 2018 with protest rallies and anti-riot police in many cities across the country. Public protests against the regime caught many observers by surprise, just as the 2011 Arab Spring had done. But displays of public anger in Iran are not new. Throughout 2017, Iran witnessed a string of protests focusing on economic grievances: unemployment, lack of opportunities, nepotism and corruption. President Rouhani has failed to deliver on his mandate of economic recovery, partly because of lingering sanctions by the United States and partly because of the nature of the rentier economy which relies on the sale of oil and gas and commercial exchange mark-ups without generating new value. The fact that Iranians had economic grievances was not news to anyone. What came as a bolt out of the blue was the ferocity of the protests, their spread across the country, and their sharp political tip. What initially started as a protest against the hike in poultry prices, soon turned into a protest against the system of Velayat Faqih where the unelected Supreme Leader holds ultimate power.

The January 2018 protests are best seen as ‘bread riots’. The fact that most protests took place in the periphery and not the capital city indicates the magnitude of their grievances. They also highlight that the fear factor which had kept people away from open confrontation with the regime has been blunted. More and more people appeared ready to take risks to their safety. This is a combustible situation with significant challenges for the longevity of the regime. But the regime chose to wait-out the protests and refrain from the use of overwhelming force. In the past, the regime had no hesitation is unleashing the Basij para-military troops on protestors. The 2009 Green Movement was put down by Basij zealots on motorbikes in the streets of Tehran. But this time, Basij took a back seat. This restraint helped give protestors a sense of acceptable risk. At the same time, it helped avoid aggravating tensions and served the regime as it waited for the public energy to fizzle out.

A few issues stood out in the January 2018 protests. These will have far-reaching implications in the future. First and foremost, the protests turned very quickly into anti-systemic riots. Reports of the unrest have noted that demonstrators chanted slogans against the regime (Down with the Dictator) and tore down pictures of the Supreme Leader Ayatollah Khamenei. The wide spread of anti-regime sentiments was remarkable. While the 2009 Green Movement was effectively an extension of the reformist faction aimed at countering the excesses of the conservatives, the January 2018 protests did not differentiate between the reformists and conservatives and rejected the whole system of clerical rule. This suggests a qualitative shift and a significant challenge to the future of the regime. This challenge will remain real as long as the ruling regime fails to deliver on the much needed economic recovery.

Second, this was a leaderless protest. The protests mushroomed all around the country, most notably in small cities and townships without any leadership. The spontaneous nature of the protests pointed to a deep sense of frustration with the economic failures of the regime, even though Rouhani’s electoral mandate was to fix the economy. There was no institution (such as unions or NGOs) to sustain the protests and offer direction. The regime’s antagonistic attitude to labour unions and civil society has deprived protestors from the structure and their natural home to foster ideas and sustain the movement. This meant that the protest lacked a positive vision for the future and no mechanism to sustain the energy.

Third was the significance of social media. In the absence of an opposition leadership and structure, the spontaneous nature of the protests were reinforces through the extensive use of social media platforms. Iranians are amongst the most connected populations in the Middle East, communicating instantaneously on media sharing apps (such as Telegram) via their mobile phones. This meant that news of protests and slogans could spread quickly. Social media as a tool of protest was already evident in the 2009 Green Movement, and also in the 2011 Arab Spring. That is why the regime moved quickly to suspend access the internet and contain news of unrest. With social media off-line, many protestors in small cities and townships were cut off from news of protests elsewhere, while the state-run media reported on pro-regime rallies in major cities. This was a demoralising experience.

The protests have died-out now, and the Iranian security agencies are engaged in the long search for the instigators. But the reason for the protests remain and it’s only a matter of time for another round of protests to erupt. This poses an existential threat to the Islamic regime, but does not present a better alternative for the population. In the absence of a vision for the future sustained by a cohesive leadership, it is hard to imagine how another anti-systemic riot could deliver Iran into a better future.

Al Jazeera English: “What caused protests to flare in Iran? ?? | The Stream”