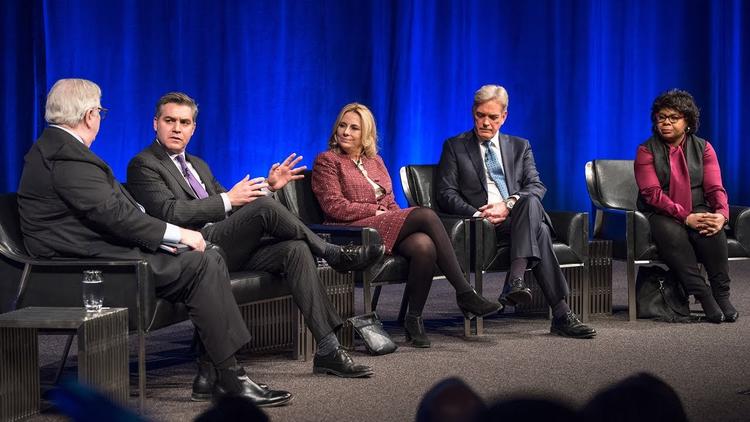 American mass media journalism is broken. There are some simple elements of US journalistic practice that have proved easy for special interests to hack, and the editors at least have allowed themselves to be used by sinister forces. (I am speaking primarily of television news here, and primarily of the 24 hour channels).

Despite the impression that Trump hates the press and forms a danger to it, the mass media actually has fallen for him, hard.

One key problem is the inverted pyramid model for American news, which is often not followed by European journalism. What I mean by that is that American journalists are trained to write a story by putting the most important thing in the first paragraph, then the second most important thing in the second paragraph, and so forth. History, if it is included, comes at the very end.

And, what the president says is considered the most important thing. So Trump gets the lede, every day, all day long.

It would be better and more informative to begin a story about racial prejudice toward immigrants (Trump’s “shithole” comment, which paralleled how German Nazis felt about most countries coming to their 1936 Olympics) with the history of racial prejudice toward immigrants– maybe focusing on a famous such immigrant who faced bigotry and overcame it. Then Trump could come at the end.

The search for ratings and advertising dollars above all is very dangerous. CNN’s Jeff Zucker put Trump on every night in summer of 2016, letting him speak directly to the public for an hour or more with no journalistic adult in the room. Trump attracted an audience, which allowed CNN to charge advertisers more. Zucker has to decide if he really wanted to promote Nazism for the sake of a buck.

The “on the one hand, on the other hand” model for cable news (also used by respectable outfits such as PBS NewsHour) is a big part of the problem. Since news gathering is expensive, the 24-hour cable outfits have moved to mainly putting on discussion panels. That move is a very bad idea. Most of the “discussion” is talking points by partisan hacks. Walter Cronkite would not have thought that was news.

What you actually should be doing is having a reporter interview people about a story and then present reportage. A Trumpie point of view or talking points may or may not be part of every story. The facts of the matter should be foregrounded, not how wacky people feel about the facts.

Since Trumpism is an American form of fascism, and since the cable news editors believe that they have to balance the discussion panels with regard to view point (on the one hand, on the other hand), they recruit Trump surrogates to speak for him. In some instances, they just hire people from his sleazy campaign.

The result is that Trump not only addresses millions with his tweets and bizarre harangues that pass for speeches, but he is ventriloquized by dozens of surrogates paid by corporate media to reach more millions with his often Nazi-like ideas.

The “two opposing sides” fixation of corporate news, the search for a spark of debate coming out of the clash of two different opinions (which is driven by the quest for eyeballs and the advertising revenue they bring) is easily manipulated by political forces for their own purposes. Thus, Twitter has discovered that hundreds of thousands of their accounts were Russian moles, and it now seems clear that Russian moles promoted both Black Lives Matter and Blue Lives Matter online in order to polarize the American public over race and help elect Trump. (Russian social media moles also promoted hatred of American Muslims as well as anti-Islamophobic groups, and in one instance a demonstration by right wing Americans outside a mosque in Texas, as well as a counter-demonstration, were both promoted by Russian sites masquerading as American ones). American journalism is focuses on glib surface divisions, giving an opportunity to those who deliberately want to polarize the public so as to mobilize people for some sleazy goal.

ISIL and other terrorist groups take similar advantage of this ability to use media to sharpen contradictions and promote both hatred and solidarity among their own followers.

This news model also allowed climate denialists and before them cigarette cancer denialists to manipulate the system. If every story has two points of view and they are equal, then you have to present both. But where one side in this debate is factually incorrect, it means you are doing the opposite of journalism. You are diluting the truth with false, paid-for propaganda.

There aren’t two factually correct sides of every issue. Racism is not a legitimate explanation for anything. Immigrants are mostly law-abiding and do not take jobs from native-born people because they compete in different labor markets. There isn’t a fixed amount of labor (a “lump of labor”) in an economy– economies can expand precisely because there are more workers available than before.

Cable news is now pumping out Trump talking points hourly to millions of people around the globe, because of their broken business model. It is degrading our society and our human values. The editors and the CEOs need to look at themselves in the mirror and decide if they really want brown shirts beating up their children in the streets, because that is where this thing is going.

Newseum: “Journalism in the Trump Era: Assessing Press Freedom in the United States”