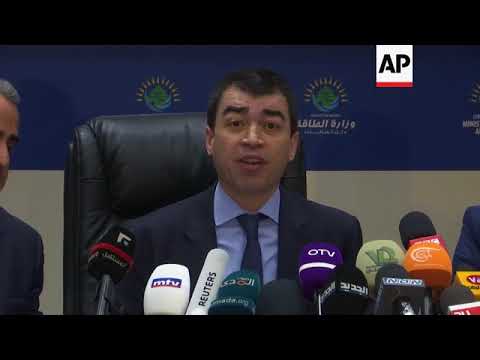 Lebanon will fully use energy block disputed by Israel – minister

Israel claims gas field put out to tender by Lebanon

Lebanon’s energy minister said on Friday there would be full exploration in an offshore energy block that partially lies in waters disputed by neighbouring Israel.

Lebanon said on Friday it had signed its first offshore oil and gas exploration and production contracts for two energy blocks, including the disputed Block 9.

A consortium of France’s Total, Italy’s Eni and Russia’s Novatek signed the agreements for the two blocks, which are among five that Lebanon put up for tender in the country’s much-delayed first licensing round.

Israel and Lebanon have exchanged threats and condemnation over the tender, amid rising tensions over territorial and marine boundaries between them.

“Today, we announce that we have started our petroleum path … after signing the agreements and launching the exploration activities,” Lebanese Energy Minister Cesar Abi Khalil said at a ceremony in Beirut.

The first well will be drilled in Block 4 in 2019, said Stephane Michel, Total’s president for exploration and production in the Middle East and North Africa.

The second well will be drilled in Block 9 more than 25 km (15 miles) from the border, he said at the ceremony. “There is no reason not to proceed in this way,” Michel added.

Lebanese and Israeli officials said David Satterfield, acting assistant U.S. secretary of state, was in Israel last week and in Lebanon this week on a mediation mission. U.S. officials confirmed his travels without detailing his agenda.

Lebanon, which views Israel as an enemy state, has an unresolved maritime border dispute with its neighbour over a triangular area of sea of around 860 sq km (330 square miles).

The zone extends along the edge of three of the five offshore energy blocks that Lebanon put to tender early last year. Block 9 juts partly into the disputed waters.

AP Archive from last month: “Lebanon to start exploratory offshore drilling for oil and gas in 2019”