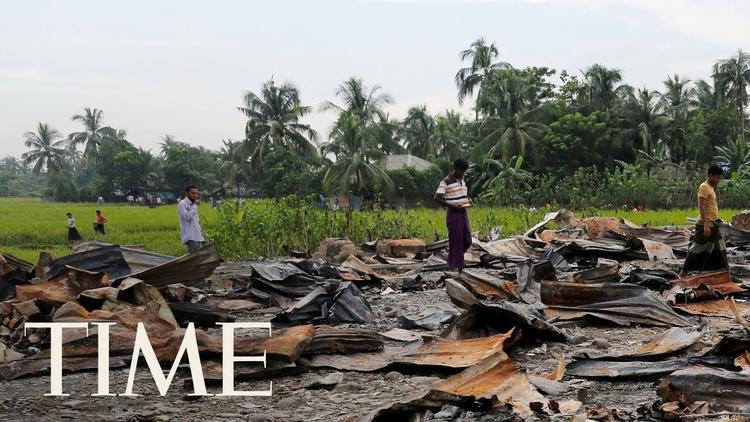 Satellite imagery shows at least 28 Rohingya villages have been leveled between December and February. However, reports produced by some human rights groups place the figure at 55.

Myanmar’s military, aided by Buddhist mobs allegedly burned hundreds of Rohingya villages between last August and November when a military clearance operation forced hundreds of thousands of Rohingya Muslims to flee from killings, rapes and other violence.

The bulldozing of villages have raised concerns by human rights groups that the Burmese government is destroying crime scenes before any credible investigation of the atrocities, some say have amounted to genocide and ethnic cleansing, takes place.

Rohingya people who were forced into exile also fear the operation is aimed at preventing them from returning to their villages and at destroying the remnants of their cultural heritage. Upward of 500,000 Rohingya have been reported as refugees since last August’s military crackdown in Rakhine state, preceded by a series of attacks by Rohingya insurgents.

Richard Weir of Human Rights Watch said “there’s no more landmarks, there’s no trees, there’s no vegetation… Everything is wiped away, and this is very concerning because these are crime scenes… what we’re talking about really is obstruction of justice.”

The organization has also asked that representatives of the United Nations be given access to Rakhine to study the allegations that the army committed murder, rape, and other crimes.

So far, Myanmar has refused to allow U.N. investigators from conducting an international probe into the mass graves reported by international press agencies and denounced by human rights organizations.

According to Myanmar officials, the clearing operation has been conducted to build new houses for the refugees returning, who were expected to go back to Rakhine after the Burmese government signed a repatriation agreement with Bangladesh.

However, many Rohingya refuse to return for fear the Buddhist majority will launch new attacks. Human rights organizations claim there are no conditions for a safe return. The Rohingya people continue to lack basic rights including citizenship.