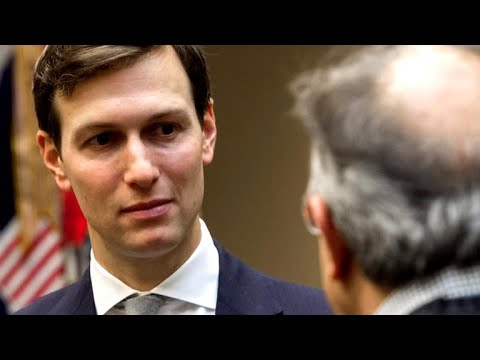 US intelligence agencies are gunning for Trump son-in-law Jared Kushner and have leaked charges to the Washington Post that officials in the United Arab Emirates, Israel, China, and Mexico have privately strategized how to use him as a pawn in their power plays with Washington.

Despite denials by his office, the charge against Kushner is clearly being led in some part by National Security Adviser H. R. McMaster, who apparently was frozen out of Kushner’s diplomatic activities for months and only recently received a commitment that the National Security Council would be read into his meetings with foreign dignitaries.

While the charge that Kushner is at least naive and very possibly corrupt is entirely plausible, we should also be suspicious of the leaks. (And remember, Ed Snowden was villified by the same people for his leaks, but they think it is all right when they do it).

The most troubling aspect of the WaPo story is that Kushner himself was not being accused of doing anything wrong by the intel sources. The central reveal was that the Emiratis, Israelis, Chinese and Mexicans think he is a useful idiot because a) he is inexperienced in the ways of the world and almost terminally gullible and b) because he has a nearly $2 billion balloon note coming due on 666 Fifth Avenue* and hasn’t been able to refinance, and so has been going around hat in hand to Gulf, Chinese, (Israeli?) and other investors.

But that foreign officials have had such conversations is not surprising and Kushner could not control them. Why are they a black mark on him in and of themselves? And is Kushner really thought more naive or corrupt than Trump himself? Why the selective leaks?

How do US intel officials know about these discussions within the halls of the Israel and UAE prime ministers’ offices and the presidential palaces of Mexico and China? They are eavesdropping on the foreign leaders with exactly the tools Ed Snowden told us about, which are apparently more often used for economic espionage than busting terrorism, as in this case. And the most troubling aspect of the US “total information awareness” doctrine of spying on everyone all the time is that US citizens are inevitably caught up in it, in an assault on the Fourth Amendment.

So look, Kushner probably has played a sinister role in some Trump foreign policy fiascos. It is alleged that he was cultivated by UAE ambassador Yousef Al Otaiba as an ally in the assault on little Qatar, after Qatar pulled out of a finance deal regarding 666 Fifth Avenue. If so, that truly is criminal, and, as Talleyrand said of Napoleon, even worse than a crime, it was a mistake. The Trump stance on the June 5 blockade of Qatar by Saudi Arabia and the UAE likely destroyed the Gulf Cooperation Council that had grouped Saudi Arabia, Oman, Kuwait, Bahrain, the UAE and Qatar since the early 1980s, and the destruction of the GCC is a great gift to Iran. If Kushner played a role in that, he helped destroy the security architecture of the Gulf and gave Iran a leg up in the Middle East. But of course the impetus for all that came from Saudi Crown Prince Muhammad Bin Salman and UAE mover and shaker Muhammad Bin Zayed; Kushner was just a way to get to Trump and to get Trump to tweet approval of the propaganda against Qatar.

Kushner has also been criticized for appearing to imply that his company, in which he still has a minority stake, could smooth the way to visas for Chinese investors in the US.

It would be interesting to hear more about alleged quid pro quos for Kushner et al. with regard to moving the US embassy in Israel to Jerusalem, which will knee-cap US diplomacy in the Muslim world for decades to come. The main impetus for that piece of stupidity, however, appears to have come from sketchy casino magnate Sheldon Adelson.

But these issues are already well known and have been reported on. The intel leaks clearly are intended to get Kushner out of the White House, and they aren’t actually charging him with anything, only saying that people out there are talking about him.

What we really should be asking is what McMaster and NSA director Mike Rodgers want to do that Kushner is standing in the way of.

An earlier version of this article misidentified the property as 666 Park Avenue, since the author probably wouldn’t be allowed on the premises of either one and so is writing about alien territory.