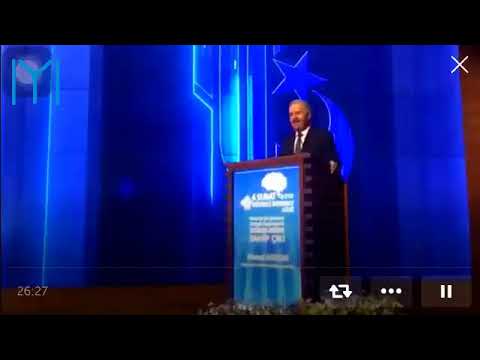 On February 6, a robot was reformatted in Ankara because it warned the Turkish Transport, Maritime and Communications Minister Ahmet Arslan to speak more slowly during his speech. Upon interruption, Arslan, jokingly, said: “Dear friends, it is clear someone should get the robot under control, do what is necessary.”

Ironically, the well-functioning robot was instantly controlled at an event that aimed to celebrate the internet and technology; it was muted for the rest of the day.

And on January 31, Ali Erbaş, the head of Turkey’s Directorate of Religious Affairs (Diyanet) slammed the controversial TV celebrity and creationist Adnan Oktar. Oktar’s TV shows, which are broadcast on his own A9 TV channel, as well as Daily Motion and YouTube, feature controversial religious references. He famously calls his female devotees on the shows his “kittens”. Erbaş denigrated the “perversity” of Oktar’s TV shows and recommended that “the authorised institution should do something about it”.

Against this backdrop, perhaps it is no surprise that new laws concerning internet and television regulation are now being issued. The aim is to grant extensive powers to the Radio and Television Supreme Council (RTÜK).

According to the draft decree, no internet platforms, including global streaming services such as Netflix, Spotify and YouTube, as well as the national internet TV stations such as BluTV or Puhu will be able to broadcast without relevant licenses from the RTÜK. These global and local platforms have bestowed great amounts of freedom for media consumers in Turkey so they can get round the TV shows on mainstream media. Deputy Prime Minister Bekir Bozdağ commented: “The upcoming decree is not for limiting the freedom of expression, it is just for monitoring.”

In fact, television has been “monitored” in Turkey since the establishment of the RTÜK by the Radio and Television Law in April 1994, initially designed to regulate private broadcasting and to enable the compliance of broadcasts with the “legal” framework. The RTÜK has since issued penalties to broadcasters and has even suspended TV and radio channels.

But all of the RTÜK’s previous activities concentrated on the circulation of offline content. The new decree, however, aims to give sweeping powers to the RTÜK over the online domain. This signals a new beginning for digital surveillance in Turkey. And according to the 2017 world press freedom index, Turkey is already doing pretty badly, ranking 155th out of the 180 countries listed.

In the aftermath of the failed coup of July 2016, AKP, the current government of Turkey, has consolidated its efforts in collecting personal data and regulating digital platforms. The government declared a State of Emergency for three months immediately following the attempted coup and has renewed it since. This enables the AKP to legislate using decree laws, that don’t require parliament to grant approval.

Meanwhile, Turkish President Recep Tayyip Erdoğan has constantly warned society of the menace of social media, particularly Twitter and Facebook. And mainstream newspapers and television channels (which mainly consist of the allies and family members of the AKP in power positions) act as a propaganda device for the government, portraying internet regulation as a way of coping with “external” threats to “Turkishness”, family values, national security and political stability.

In 2017, the government blocked all access to Wikipedia, banned dating shows, and shut down over 20 television and radio shows. Meanwhile, in just the last couple of weeks, 449 people were taken into custody for writing social media posts that criticised the government’s recent military operations in Afrin Canton in the north of Syria, a region that Kurdish forces captured from Islamic State.

This current witch hunt, combined with the influence of the new decrees, could potentially lead to unprecedented amounts of self-censorship, reducing people’s freedom or willingness to express their political views on social media.

But we should not despair. I hope that these new infringements on freedom of speech will lead to new waves of cultural and digital activism by tech-savvy generations. Continuous censorship and regulation is a potential catalyst for creative dissidence. Filmmakers in Turkey have already found creative ways to cope with censorship in recent years, for instance by using black screens stating “these parts cannot be shown because of the censorship by the Culture and Tourism Ministry”.

In a recent interview, for example, Kurdish director Kazım Öz told me how he has coped with censorship by not stepping back and explicitly exposing it in his last film Zer (2017). Öz used a dark screen in place of the censored images. Showing the name of the Ministry of Culture and Tourism on all these dark scenes, Öz explicitly displayed the absurdity of these regulations.

Citizens of Turkey have long bypassed existing internet regulations by using VPN (Virtual Private Network) and other methods to get round the blockage of certain websites. The latest draft decree certainly points to a further step towards a dystopian future for Turkish freedom of expression and human rights, but it could also instigate new imaginings for the future of social and digital change.

European Parliament: “EU-Turkey: Getting out of the deadlock”