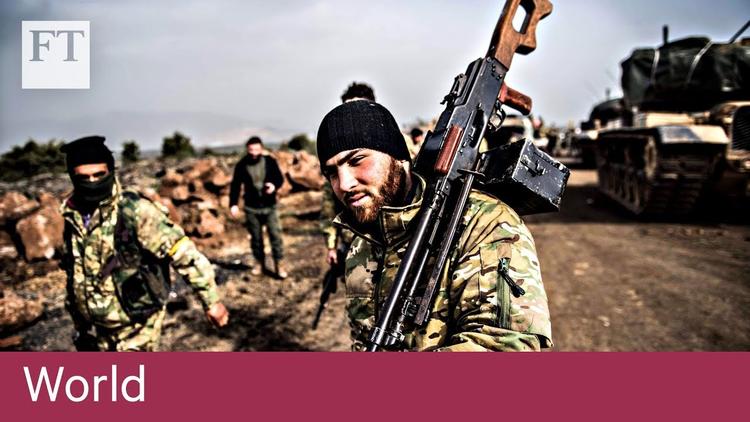 Fundamentalist Salafi militias, some linked to al-Qaeda, and backed by Turkey, have allegedly taken three new villages in the Afrin canton away from the leftist Syrian Kurdish People’s Protection Units (YPG). Over all, the Turks and their allies claim the conquest of 71 villages in northern and western Afrin.

A Turkish airstrike, in the meantime, allegedly destroyed a YPG vehicle convoy nearing Afrin with armored vehicles and weapons, creating a massive set of explosions.

Turkey and its Sunni Arab allies are seeking to establish a buffer zone between the Syrian Kurds and the Turkish border in the region west of Aleppo. This effort requires removing Kurdish populations from Afrin and its surroundings and replacing them with pro-Turkish Syrian Sunni Arabs.

Although Turkey’s president Tayyip Erdogan maintains he is pursuing this fight to stop Kurdish terrorist against Turkey, there is no evidence that Afrin was a threat to Turkey, and indeed the region was relatively quiet. It is likely that Erdogan is attacking Afrin to send a message to the United States that he will not permit the regularization of a semi-autonomous Kurdish military force on his borders. Wars are also useful in shoring up public support, and Erdogan is widely viewed as increasingly dictatorial outside his own party. He has had war critics, and indeed tens of thousands of other critics, summarily fired or arrested.

In response to a series of battlefield losses, the YPG in Aleppo has allegedly coordinated with the Baath government of President Bashar al-Assad, turning over to the Syrian Arab Army the areas of Aleppo and immediate vicinity it controlled. This move freed up YPG fighters to go defend Afrin.

The official Syrian news service, SANA, which is a mouthpiece of the Syrian regime, alleges that Shiite militias have reached the enclave of Afrin, ready to fight the fundamentalist Salafi rebels deployed by Turkey as an adjunct to its invasion of the Kurdish-majority canton. It says that hundreds of residents of the city of Afrin came out into the square to welcome the support, and chanted slogans in favor of their citizenship in the Syrian nation. They opposed the Turkish aggression on Syrian territory.

Commenting on the ongoing situation in Syria is made extremely difficult by the fog of war and the contradictory reports from the various propaganda arms at work to shape public perception of the situation. All we can do is try clearly to identify the sources of allegations and attempt to weigh their reliability.

Syria’s Kurds have been badly treated by the Arab nationalist Baath government in the past, and most Syrian Kurds likely dream of independence or at least a large amount of autonomy. Some of Iraq’s Kurds, however, are cautioning them not to be overly rash or ambitious, given the debacle the latter faced over Kirkuk in a standoff with the Iraqi government.

That the Syrian Kurds in Afrin were enthusiastically chanting about being part of Syria and welcoming fundamentalist Shiite militias could be true, but both would be a function of desperation. Turkey is attempting to chase most Afrin Kurds away from any area near the Turkish border, and is deploying the impressive fire power of a NATO member to do so. The US abandoned the Afrin Kurds to their fate, despite having depended on the Kurdish YPG militia to defeat ISIL in Raqqa. Afrin as a Kurdish canton is substantially to the West of the other two Kurdish enclaves in Syria, Jazira and Kobane, and while US special operations forces are embedded with the latter, Afrin is not in the US sphere of influence.

How many Shiite militiamen have actually gone to Afrin and how effective they will be against the Turks and their Salafi allies is unclear as yet. These pro-Damascus militias typically include Lebanon’s Hizbullah, Iraqi Shiite militias freed up by the fall of Mosul to the Baghdad government, and Afghans shanghaied into service by the Iranian Revolutionary Guards Corps.

If these various reports are true, a YPG Kurdish and Shiite militia coalition is forming to fight the Salafi guerrillas allied with Turkey, and the Damascus regime of al-Assad is coordinating with the Kurds to take over territory formerly under YPG control in the Aleppo region so as to free up YPG fighters in the struggle against Turkey.