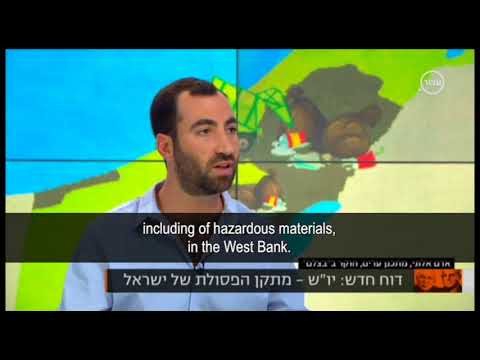 Israel remains the only UN member state which has never declared where its borders are. In fact, it has refused to demarcate any borders due to the Zionist intention to colonise the whole of historic Palestine. For less desirable requirements, however, it does not hesitate to apply a temporary suspension of its agenda, recognise separate areas and impose additional hardships on Palestinians.

As with several other discriminatory policies, Israel acknowledges Palestinian existence and land only when it can use such recognition to suit its nefarious purposes. Human rights group B’Tselem’s December 2017 report called “Made in Israel: Exploiting Palestinian Land for Israeli Waste” reveals that there are 15 Israeli waste treatment facilities in the occupied West Bank. Six of these facilities process hazardous waste.

By treating its waste in the occupied Palestinian territory, Israel is evading several responsibilities which can be summarised by pointing out one particular discrepancy, as B’Tselem states: “Transferring waste into an occupied territory is a far graver issue, as residents of an occupied territory cannot oppose the decisions of the occupying power.”

The report investigated four of the hazardous waste treatment facilities and a sewage treatment plant in the occupied West Bank. The ramifications of such facilities, which B’Tselem states are operating without strict control, include the contamination of soil and water, the risk of drug resistant organisms and an increased threat of illness. Natural resources are also being damaged permanently.

B’Tselem has outlined the differences in Israel’s waste treatment legislation, showing that it applies less stringent procedures for waste facilities in the occupied West Bank. Inside Israel “proper” — that is, the land not recognised as occupied by international law — waste treatment facilities require permits from the Ministry of Environmental Protection. The facilities are also required to carry out assessments that detail their impact upon the environment. Since waste treatment facilities in the occupied West Bank are regulated by the Administration of Local Councils, Israel does not face the same obligations and is therefore not required to carry out impact assessments due to the absence of legislation on pollution.

The exemptions from accountability in the occupied West Bank have made it easier for hazardous waste to be treated away from scrutiny and with the opportunity to oppress Palestinians further. B’Tselem makes an important observation in this regard; it is Palestinians who are denied freedom of movement and whose spaces are restricted, unlike the Israeli settler population in the occupied territories, who have the freedom to live anywhere they choose.

With such discrepancies as a result of colonial expansion, it is important to make a connection between the violations and Israel’s exploitation of land and how it defines ownership. The report’s conclusion reads thus: “Israel has turned the West Bank into a sacrifice zone, exploiting and harming the environment at the expense of the Palestinian residents, who are completely excluded from the decision-making process.” The last premise, which is the exclusion of Palestinians, is disregarded routinely when discussing the implications of Israeli colonialism, due to the refusal to connect land appropriation with the consequences of such exploitation.

This report clearly associates the environmental and health impact with the wider colonial project. The international community’s recording of Israel’s violations, though, are situated within the context of violations themselves, thus breeding further impunity for Israel while eliminating the collective international responsibility towards Palestinians.