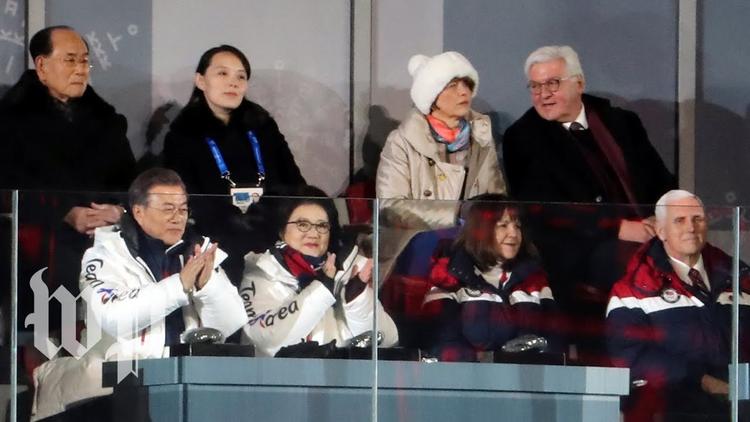 The Seoul Olympics should be a joyous event, a celebration of athletic skills and international cooperation. At least during this brief time, sports should overshadow the dark realities of tribalism and hostilities. The opening ceremonies offered us glimpses of hope: a unified team for North and South Koreans and a handshake between the South Korean leader and the North Korean’s leader’s sister.

Vice President Mike Pence, the official representative of the U.S., sat stone-faced during most of the march of nations. He stood up and applauded only when the U.S. team came onstage. America First!

Besides boorishness, Pence’s action symbolizes the attempt to demolish America’s leadership in the world. No leader can maintain leadership if they imply that “I’m the only one who counts and the hell with the rest of you.” Yet Trump’s decisions to withdraw from the Paris Accord, Iran nuclear pact, and other hallmarks of diplomatic progress are decisions that ignore the rest of the globe.

International summits, then, have resulted in disasters for Trump during his first year of presidency. At the G-7 of the world’s most powerful nations, he scoffed at both NATO and trade deals. After Trump’s participation in the G-20 summit, an Australian journalist called him “the biggest threat to the values of the west.” The headline from the L.A. Times’ article on the Davos Summit says it all: “Trump’s ‘America first’ approach receives a cold reception at global summit.”

Indeed, the international reactions to Trump’s “America First” mentality indicate a shift that should concern us all. Russian oligarchs have toasted his inaugural speech with champagne and Chinese investors are filling in the economic void left by the U.S. government’s repudiation of global trade. Most nations, though, will not benefit from this shift. Once-faithful allies such as Germany and India must decide whether to step in as leaders themselves or rely on new leaders such as China.

What is also troubling is that the U.S. is not some minor country who has had minimal impact on global issues. Consider the following:

Ø The U.S. has double the fossil fuel consumption of industrial nations such as Great Britain and Japan—-a key factor for the environment;

Ø The average American uses 53 more times resources than a Chinese person, and 35 times than an Indian person;

Ø The U.S. maintains 800 bases in 70 countries, thus exerting a multi-billion influence on several regions; and

Ø U.S. troops are still in Iraq, Afghanistan, and other hotspots.

Based on these facts, it is impossible to conceive of the U.S. retreating from the global stage as if its presence would not be missed. It would be like pretending that an elephant is not stomping in a neighborhood, crushing everything that is underfoot. The U.S. is simply too large of a presence in the world for it to retreat quietly. It is also unalterably entrenched in international affairs on so many levels: economic, military, etc. During the 1930s when homegrown fascists used the term “America first,” isolationism had a slim chance of actually working. In this twenty-first century, though, the “America First” policy could only result in American self-destructiveness and the destruction of others.

Once the Trump debacle of a presidency is over and we elect a more sensible leader, this new president will have the tough job of earning the forgiveness of nations affected by the “America First” foreign policy. This reminds me of the class title that a sociology professor had taught after the 9/11 tragedy: “Why they hate us.” Unfortunately, the administration’s current actions are engendering hostility instead of acceptance. After Trump (and maybe Pence) leave office, we will have to look at ourselves unflinchingly. Our experiment with illiberalism should remove any vestige of smugness that “it could never happen here.” Humility, not arrogance, should guide our future diplomatic efforts.

The U.S. is still a great nation. Globally, we could still provide leadership if we change course because most nations want to work with us on reducing climate change and other challenges. Hopefully, our allies will forgive us for the flawed institutions that are not providing enough checks and balances to limit the president’s power. Despite a possible constitutional crisis in American politics, we must not forget the obligations of the U.S. to the rest of the world. Fighting the “America First” policy means demanding a return to the traditional values of diplomacy and goodwill. As long we keep on resisting America’s descent into a proto-dictatorship, we may earn the forgiveness of other nations one day.