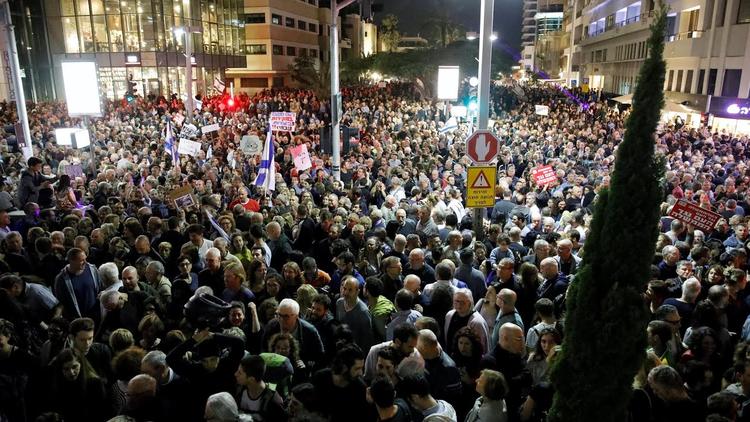 Police said on Tuesday enough evidence had been found for Netanyahu to be charged, saddling the four-term premier with one of the biggest challenges to his long dominance of Israeli politics.

Netanyahu, 68, denies wrongdoing in both cases and has said nothing will come of the police investigations. It is now up to the attorney general to determine whether to press charges against him.

Around 1,000-2,000 protesters rallied in a Tel Aviv square, some with signs saying “crooks go home” and “crime minister”.

Netanyahu: What happens next?

“From a moral standpoint, this is a disgrace to the state of Israel, where a prime minister is suspected of such serious crimes,” said Oren Simon, one of the protesters. “He should go home. Enough.”

A poll published on Wednesday showed almost half of Israel’s electorate believe the police rather than Netanyahu.

Netanyahu is currently entangled in four political scandals: Case 1000 which involves allegations that the PM and his wife accepted illegal gifts from businessmen; Case 2000 which accuses Netanyahu of attempting to buy favourable newspaper coverage; Case 3000, also known as the “submarine scandal”; and Case 4000, in which a close associate of Netanyahu is suspected of providing confidential information to Israel’s largest telecoms company.

It could be months before the attorney general makes a decision on whether to charge him.

File from two months ago: