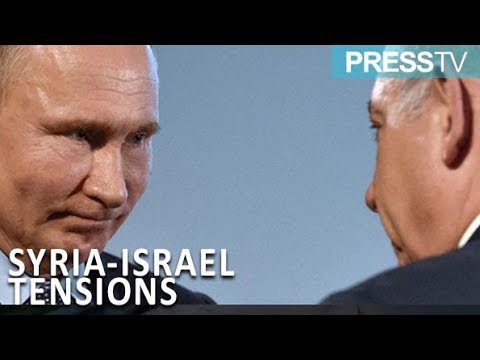 BBC Monitoring reports on a statement in Russian at the site of its Ministry of Foreign Affairs, reacting to the Israeli air attacks on Syria and the shoot-down by the Syrians of one Israeli fighter-jet.

The Foreign ministry expressed “serious concern” over the Israeli air strikes, and called for restraint. The statement inserts Russia into the issue by asserting that the Israeli air strikes could cause violence to rise in and around the “de-escalation zones,” areas where rebels and the Syrian government have an uneasy temporary truce. (While many of these zones have become a joke because of Syrian government incursions, some, like the one around Deraa, have held, and have reduced violence).

Russia asked Israel to “respect Syria’s sovereignty and territorial integrity” and pointed out that Tel Aviv has put Russian servicemen in danger.

As diplomatic notes go, this one is brutally frank. The demand that Israel respect Syrian sovereignty is perhaps a way of teasing the Israelis, who maintained that the Syrian shoot-down of their jet, which was striking targets inside Syria, was an “attack on Israel’s sovereignty.” Apparently Israeli sovereignty in the minds of the ruling Likud Party and cabinet allies (a Star Wars bar scene full of far-right weirdo little parties) extends beyond the still undefined Israeli borders to wherever they want it to.

Likewise, the warning that Israel should not put Russian servicemen in danger is blunt. Presumably the issue arises because Israel will attempt to destroy Syrian air defense batteries, many of them trained and advised by Russian military personnel.

BBC Monitoring also reports that according to Ynet in Hebrew, Israel called on Russia to intervene to stop Iran from flying drones in the Golan Heights area of Syria, part of which Israel militarily occupies, and on part of which it gives aid to fundamentalist Syrian rebels, one of them with al-Qaeda ties.

Israel hit 3 Syrian anti-aircraft batteries on Saturday, along with 4 targets it says are Iranian military facilities in that country, but says it has no intention to go further at this time. (I.e. Tel Aviv realizes that hitting a lot of Syrian anti-aircraft stations would in fact risk killing Russians).

Israeli Prime Minister Binyamin Netanyahu and Russian President Vladimir Putin talked by phone on Saturday, according to Russia’s Interfax. Putin discouraged Israel from actions that would further destabilize Syria. Netanyahu declared israel’s right to protect itself, by which he seems to mean its right to protect its Golan occupation and sphere of interest in Syrian Quneitra.

It seems to me that Russia increasingly has to make some decisions about the Israeli front in the southwest of Syria. Either it has to restrain Iran and Hizbullah, effectively ceding control over that part of Syria to the fundamentalist rebels and the Israeli army, or it has to take over Syrian air defense and prevent Israeli air strikes in Syria. Otherwise, as the Russian Foreign Ministry pointed out, Russian personnel are increasingly in danger.

On the Israeli side, Netanyahu, who is in danger of indictment on corruption charges, has been accused of ‘wagging the dog’ or trying to escalate tensions with Syria and Iran for political gain inside Israel.