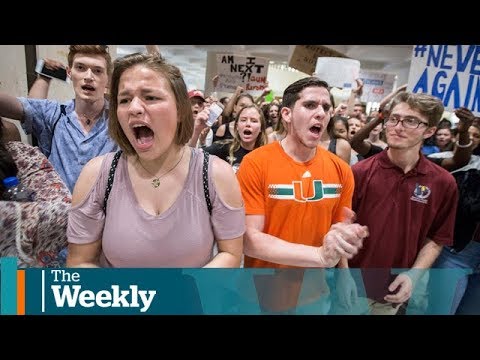 The mass shooting at Marjory Stoneman Douglas High School, where a former student gunned down 15 children and two teachers has prompted some of the teenage survivors of the massacre to speak out. Lina Crisostomo, 17, a student at Stoneman Douglas, argues that sitting on the sidelines is no longer an option. “If this keeps happening and nothing is done,” she says, “none of us are safe.” She and others have organized marches and contacted legislators, asking them to enact stricter gun control legislation.

Their activism has had an effect. Florida’s state legislature is considering raising the legal age to purchase a gun. Jose Oliva, a Republican congressman from Miami, said, “The tremendous civic outpouring of these children” is largely responsible for newly-reconsidered gun regulations. It seems that these young people have come to the reasonable conclusion that many adults in this country cannot be relied upon to protect them.

Not everyone is happy with these developments, however. Some commentators have framed the high schoolers’ efforts as the collective result of manipulation on the part of anti-gun activists. One such pundit, Ben Shapiro, writes in the National Review that these “lumps of mental clay” have been driven to rash behavior and are essentially puppets of “the Left.” He asks, incredulously, “What, pray tell, did these students do to earn their claim to expertise?” One might answer that, unlike Shapiro, they can speak to the mental and physical effects of gun violence.

He continues his incredulity with “Children and teenagers are not fully rational actors,” so their recent civic activities must be dubious. One could argue that many members of the US Congress might fit this description, too, especially when it comes to gun legislation.

Was it rational to do absolutely nothing after 20 children between the ages of six and seven years old were killed at Sandy Hook Elementary School? Is it rational that grown men, elected to a democratic body, refuse to address the sentiments of the majority of the population that has called for more rigorous firearms laws? Is it rational to call such a country a functioning democracy? For the many variations of Ben Shapiros, democracy must be strictly formal, rigidly circumscribed, and ideologically monitored. Outbursts of activism can only be, by definition, immature, the result of irrational actors.

But discrediting those with legitimate grievances is his job. He’s part of a camp that also casts doubt on the frequency and severity of racism and sexism. “Things aren’t that bad,” say the Shapiros of the press. “People are just being hysterical.” Ideological correctives must be applied to narratives that do not square with the worldview of editors and TV personalities like him.

Shapiro-like commentators are suggesting that these high school kids, who are all millennials, are too young, perhaps deficient in fine motor skills, to understand how to operate a Smart Phone or home computer to purchase bus tickets to a rally in a show of support for sensible firearms legislation; to march to another town with the aid of Google Maps and GPS to show solidarity with each other; to use Facebook and Twitter for communicating with their peers about the massacre they survived, or to express deep anxiety about the next one that they might not; to tell people who have not experienced visceral terror what it was like, and to send out calls directed to us – the grown-ups – to help them.

“But they know nothing about these things. They are not fully rational actors.”

It is conceivable that these kids, who have been sitting in American History and US Government classes for at least a year or two, are too cognitively unsophisticated to understand the basics of how the government functions; thus, they must surely be unable to call their legislators all by themselves (on their little understood and even less-used Smart Phones) to voice their concerns; to request that their elected representatives enact laws for expanded background checks. They are certainly too inexperienced and lack the necessary vocabulary to relate to Congresspersons the carnage that semi-automatic weapons can inflict on human flesh; too naïve to ask for a law banning such weapons. No, clearly someone has been pouring poison in their ears about the Second Amendment.

“They know nothing about these things. They are not fully rational actors.”

It’s also unfathomable that without the studied coaching of their elders, they could have ever held vigils for their slain friends and classmates. Also, without indoctrination, they could never have remembered and made connections to the other, earlier victims of gun violence whom they had never met. Those victims’ bones, which used to be somebody’s children back in life, have been moldering in graveyards since before they were even born, so, pray tell, how could they have ever known about them? Reading?

They are too young to understand that democracy comes at a price.

“They know nothing about these things. They are not fully rational actors.”

Instead, they have been put up to these harmful activities by manipulative adults with a pernicious political agenda. They have been coerced into peaceful protests and reasonable activism, which are permitted in a democracy, over buying a gun for protection or insisting on armed teachers. Some say there is no way that a sixteen-year-old could have ever arrived at this (ir)rational decision on her own. It’s an outlandish notion.

“She knows nothing about these things. She is not a fully rational actor.”

And what about the many parents who support their children’s efforts? Well, perhaps they are being too emotional, but that’s understandable given that their kids just narrowly escaped this most recent slaughter. One can forgive the ill-considered ideological transgressions of those who are in shock.

For a little while.

“They know about these things. They will soon be fully rational actors again.”

No, cooler, more sensible heads must prevail. If they do not, then we will tempt tyranny. Hysterical, pathos-fueled efforts to establish Utopian notions of child safety through (ir)rational arguments and respectful requests must be tamped down.
Besides, people have their rights (but some have fewer rights, it seems).

No, we need guns now more than ever because more guns equal a safer society.

All you need to do is look around.

That would be irrational.

After all, those kids didn’t know anything, either.