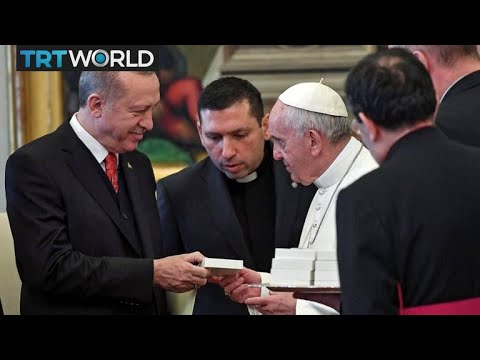 Both Erdogan and Pope Francis are opposed to US President Donald Trump’s decision to recognise Jerusalem as the capital of Israel, which many US allies say could doom Middle East peace efforts.

Tayyip Erdogan made the first visit by a Turkish president to the Vatican in 59 years on Monday, discussing the status of Jerusalem with Pope Francis, as scuffles broke out between police and demonstrators nearby.

Police, who put much of the centre of the city under lockdown for the visit, said two people were detained after demonstrators tried to break through cordons to get closer to the Vatican from an authorised protest several blocks away.

Returning a visit made by the pope to Turkey in 2014, Erdogan spoke privately with Francis for about 50 minutes in the pontiff’s frescoed study in the Vatican’s Apostolic Palace, which he uses mostly for ceremonial purposes.

A Vatican statement said the talks included “the status of Jerusalem, highlighting the need to promote peace and stability in the region (Middle East) through dialogue and negotiation, with respect for human rights and international law.”

Both Erdogan and Pope Francis are opposed to US President Donald Trump’s decision to recognise Jerusalem as the capital of Israel, which many US allies say could doom Middle East peace efforts.

At the end of the private part of the meeting, the pope gave Erdogan a bronze medallion showing an angel embracing the northern and southern hemispheres while overcoming the opposition of a dragon.

“This is the angel of peace who strangles the demon of war,” the pope told Erdogan as he gave him the medallion, made by the Italian artist Guido Verol. “(It is) a symbol of a world based on peace an justice.”

The public part of the meeting, with reporters and Erdogan’s entourage, was cordial, although both men seemed stiff at the start while seated at the pope’s desk before journalists were ushered out.

Erdogan’s motorcade entered a virtually deserted St. Peter’s Square after the streets that are usually bustling with tourists were closed due to security fears.

An authorised demonstration of about 150 people including Kurds and their supporters outside nearby Castel Sant’Angelo, a fortress on the banks of the River Tiber, turned violent when police in riot gear pushed back shouting and shoving protesters who tried to break through their lines. At least one demonstrator was injured, a witness said.

Some 3,500 police and security forces were on duty in Rome and authorities declared a no-go area for unauthorised demonstrations that included the Vatican, Erdogan’s hotel and Italian palaces where he is meeting the president and prime minister.

Matteo Salvini, head of Italy’s anti-immigrant Northern League, said in a tweet that it was “shameful” that the government was receiving Erdogan, calling him “the head of a bloody, freedom-killing Islamic regime”.

Erdogan and the pope spoke by phone in December after Trump made his announcement on Jerusalem and agreed that any change to the city’s status quo should be avoided.

The Vatican backs a two-state solution to the Palestinian-Israeli conflict, with both sides agreeing on the status of Jerusalem – home to sites holy to the Muslim, Jewish and Christian religions – as part of the peace process.

Palestinians want East Jerusalem as the capital of a future independent state, whereas Israel has declared the whole city to be its “united and eternal” capital.

Among Erdogan’s delegation was the Mehmet Pacaci, Turkey’s ambassador to the Vatican. Erdogan recalled Pacaci to Turkey in 2015 when Francis became the first pope to publicly call the 1915 killing of as many as 1.5 million Armenians “genocide” – something Turkey has always denied.