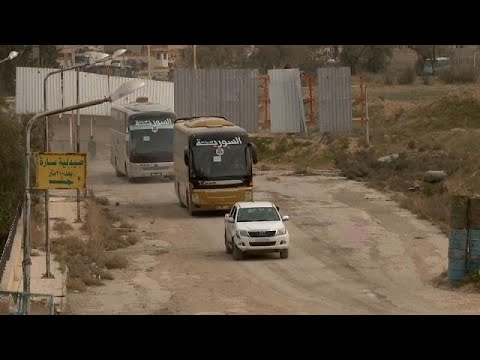 One of the last major rebel enclaves in Syria, East Ghouta, is near to falling back completely under the control of the Baath regime of Syrian president Bashar al-Assad. The enclave consists of three districts, Harasta, Zamalka-Irbin-Jobar, and Douma, east and south of the capital. Although the guerrilla groups that dominated these areas tended to be hard line Salafis, many of the ordinary Sunni people living there in their hundreds of thousands were just tired of the dictatorial, kleptomaniac and sectarian-biased Baath regime.

Douma is the hold-out.

These events underline the split in the Trump administration. Trump himself has sometimes suggested that Syria would be better off under an Arab strong man such as Bashar al-Assad and that Putin should be allowed to handle Syria.

Trump’s new National Security Adviser, John Bolton, has urged that the Syrian government be overthrown and a Sunni Arab (fundamentalist, al-Qaeda-linked?) state be established there. Although Bolton is a bigotted Muslim-hater, his willingness to turn Syria over to Salafi guerrillas derives from his greater hatred of Iran, which he would like to block in Syria and Lebanon, in part on behalf of the Israeli right wing.

The Russian army said Sunday morning it was postponing further talks with guerrillas in Douma until the evacuation of fighters from Zamalka-Irbin-Jobar. Although in the meantime there is supposed to be a ceasefire at Douma, the regime and Russian fighter jets continue to pound it.

An intense regime and Russian campaign of artillery and air bombardment in recent weeks has led to the exodus of some 105,000 civilians from East Ghouta (former population estimated at 400,000, but likely it was much less even before this recent campaign). It constitutes suburbs and rural villages to the east and south of Damascus. The Syrian Observatory, a pro-rebel web site run in the UK, estimates that 1600 persons have been killed since the recent campaign began. Critics charge that the Syrian Arab Army and the Russian Aerospace Forces have engaged in indiscriminate bombardment, sometimes collapsing civilian apartment buildings and crushing families and children.

As Al Jazeera English explains, Harasta had been dominated by the Freemen of Syria hard line Salafi guerrilla group, but on Wednesday those fighters admitted that they were immobilized by surrounding regime forces and lacked medicine and under constant bombardment. They agreed to be evacuated to the province of Idlib in the north, where the Freemen of Syria is one of several important guerrilla groups.

The Brigades of the All-Merciful, holding the neighborhoods of Jobar, Zamalka and Irbin, agreed on Friday to be evacuated to Idlib, as well, and 7,000 of these fighters along with some civilians began leaving on Saturday.

As part of the deal with the Brigades of the All-Merciful, their allies, the Syrian Conquest Front (formerly Nusra Front and formerly an al-Qaeda affiliate) that dominates the nearby Yarmouk Palestinian camp (through no fault of the refugee Palestinians, most of whom have left) also agreed to be evacuated to Idlib.

Part of this evacuation deal involved a Russian offer to provide military police to patrol the neighborhoods abandoned by the rebel fighters, in an attempt to mollify the local populations about the danger of Baath reprisals. The Baath secret police is vicious and has killed tens of thousands of people, including 10,000 jailed detainees, during the seven-year war. The secret police are dominated by members of the ruling Alawite sect of Shiism, while most East Ghouta residents are conservative Sunni Arabs. Some observers estimate Alawites at 14 percent of the Syrian population, while Sunni Arabs are probably 65%. A majority of Syrian Sunnis, however, are urban and secular-minded and have stuck with the secular Baath regime rather than joining with their fundamentalist co-religionists, who tend to be from the urban working classes or the rural towns and villages.

The last remaining rebel enclave, Douma, is held by the Saudi-backed Jaysh al-Islam. It has bad relations with the Freemen of Syria, which seems to be a Turkish proxy, and with the Syrian Conquest Front (former Nusra), which dominates Idlib. Bad relations, as in, they have engaged in vicious firefights with them. So for Jaysh al-Islam, going to Idlib is not an option. It is not as if, anyway, Idlib is a desirable destination. The regime and the Russian Aerospace Forces have been making a move on it in recent months, as well. Al Jazeera says there is talk of Jaysh al-Islam going west, near the Lebanese border, but I can’t imagine Lebanon and Hizbullah would be happy about that.