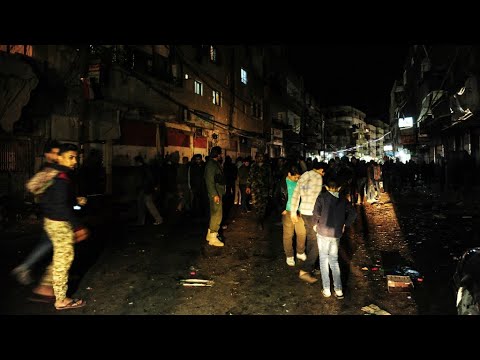 A rocket fired by rebel forces at a market, Kashkul, in the Jaramana suburb of Damascus on Wednesday killed dozens of people.

It strikes me that this incident encapsulates the deep tragedy of the Syrian civil war. Jaramana is a mixed Christian and Druze neighborhood 3 km. south of Damascus and has since 2011 been under the control of the Baath government of Bashar al-Assad. The Druze are an esoteric offshoot of Ismaili, Shiite Islam who practice secret knowledge and do not have mosques or Friday prayers.

The rocket strike was likely intended as revenge by the Sunni Muslim fundamentalist groups in East Ghouta, over two-thirds of which has now been taken by government troops in the ongoing current regime push to take all of this district outside the capital.

Syria’s demography is a matter of educated guesses. But perhaps 14% are Alawi, an esoteric Shiite group, and 5% Christian and 3% Druze and 2% Twelver Shiite, which gets you near to 25% of the population. Then 10% are Kurds, mostly Sunni leftists but including some minorities like Yazidis. So that is 35% of the population outside the Sunni Arab mainstream. Of the 65% remaining, mostly Sunni and Arab, more than half are urban and secular-minded, many of them socialists with a Marxian ideology mixed with Arab nationalism. Sunni Muslim fundamentalists are likely no more than 20% of the population.

As the Syrian revolution of 2011 turned into a civil war and as strongman president Bashar al-Assad maneuvered the democratic opposition into being a guerrilla movement increasingly dependent on Gulf money, the civil war was turned into a fight between the regime and fundamentalist Sunni Arabs in the medium cities and small towns and rural areas.

The 35% non-Arab or non-Sunni part of the population and the 33% of Sunni Arab secularists or regime loyalists, mainly in the big cities, equal together 68% of the population, over two-thirds.

The Salafi fundamentalists who targeted Druze and Christians were punishing them for the defeat at East Ghouta and were marking them out for fellow Sunni Arabs as deserving of being targeted as supporters of the regime. But in a country where a super-majority is not Sunni Arab fundamentalists, what that sort of mayhem does is drive everybody into the arms of the regime. If the choice is between the seedy Baath one-party state and democracy, maybe most Syrians would choose democracy. If the choice is between a government that will protect Alawis, Christians, Druze, Shiites, and secular Sunnis and a government staffed by Salafi extremists with ties to al-Qaeda, then in today’s Syria, Bashar al-Assad wins every time.

This market bombing, despite its mayhem and cruelty, will soon be forgotten by all but the relatives of the victims. But it sums up in itself how we got to 2018 with the regime in control of most of the country. The Sunni Arab fundamentalists acted as their own spoilers, spooking the super-majority in the country that does not share their ideology.