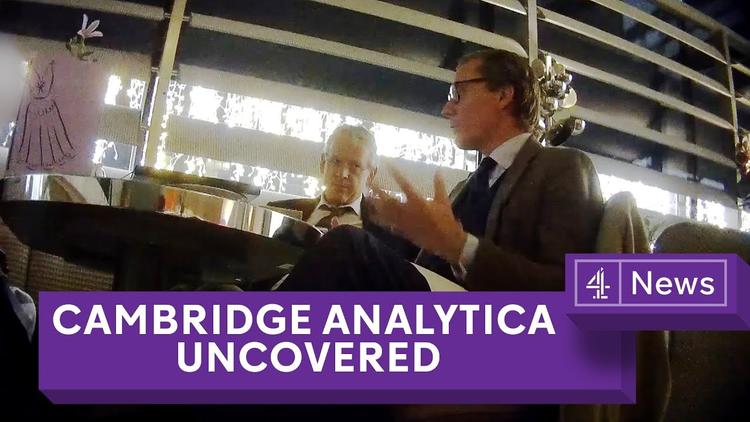 The 1999 film “The Matrix,” written by Lana Wachowski (formerly Laurence “Larry” Wachowski and Lilly Wachowski (formerly Andrew Paul “Andy” Wachowski), depicts a future in which human beings have been imprisoned by machines in capsules that siphon off their heat and energy and which create the illusion of everyday life to fool them into thinking they are at liberty.

The film falls into the genre of cyberpunk, begun by Canadian author William Gibson with his “Neuromancer” in 1984, and ironically enough written on a mechanical typewriter.

The genre recognizes that cyberspace is a form of consciousness, and that conflict in that realm takes the shape of struggles to influence perceptions of reality.

“The Matrix” appears inadvertently to have predicted the rise of the data mining firm, Cambridge Analytica, founded by white nationalist billionaire Robert Mercer (a perfect Bond villain) and for a while having as its vice president the neo-Fascist pooh-bah Steve Bannon (who went on to chair the Trump campaign and to serve as White House chief strategist, and who has expressed admiration for Italian fascist dictator Benito Mussolini–whose army killed or wounded 300,000 US and British troops).

Although much of the current brouhaha over CA has to do with its predatory use of the predatory Facebook, the big scandal should be that mainstream US politicians were willing to hire a firm founded by people with a very smelly ideology that reeks of Mein Kampf.

Cambridge Analytica staffers have been caught on tape admitting to using dirty tricks to discredit rival politicians, including providing them with “Ukrainian girls” or offering them bribes and videotaping the response. The company has been employed by political campaigns in dozens of countries around the world.

What’s new is that the firm used techniques like a Facebook app (invented by a Russian scientist) that offered psychologically to profile you and which scooped up all your friends’ information as well, creating a database of 50 million individuals.

That data told CA whether a person was a liberal or a conservative, an extravert or an introvert, and allowed a relatively thick profile to be created.

The firm then used the characteristics of the internet, according to AP, where one click leads to another click, to surround individuals with a false reality.

The way this works is that say you know that someone is an unemployed auto worker and you make up phony internet placards misrepresenting Bill and Hillary Clinton as anti-labor.

And you set it up so that once the person clicks on one such piece of propaganda, they are presented with several more links of the same ilk. And then so are all their Facebook friends. So you create a Matrix world in which auto workers should give Trump a chance because the Democratic Establishment has failed them (which, even if the second part of this proposition is true, is a non sequitur). And you set it up so that that is what people in Detroit and Flint and Ypsilanti are talking about with one another, on line and off line, what they are liking on Facebook, what they are sharing on their timeline.

And then Trump wins Michigan.

AP notes that Chris Wylie, a Cambridge Analytica co-founder, told NBC, “This is based on an idea called ‘informational dominance,’ which is the idea that if you can capture every channel of information around a person and then inject content around them, you can change their perception of what’s actually happening.” He called it “fake news to the next level.”