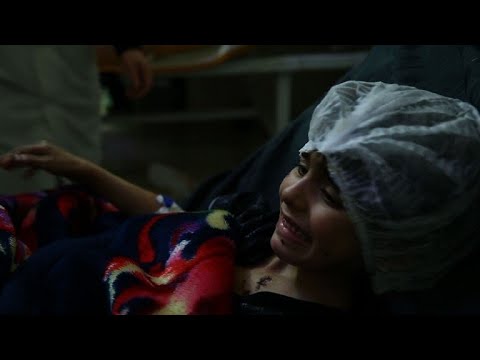 Reuters reports that Zeid Ra’ad al-Hussein, United Nations High Commissioner for Human Rights, warned Syrian (and Russian?) officials that there is credible evidence that they are committing war crimes in East Ghouta, and perhaps crimes against humanity.

A war crime is a single action that violates international laws on the conduct of war, typically involving atrocities against non-combatants. It is analogous to murder in civil law.

A crime against humanity is a systematic pattern of the commission of war crimes. It is more like serial killing.

Al-Hussein warned that the UN human rights commission is collecting evidence on the culpability of particular individuals, in hopes that eventually they can be brought to trial.

Al-Hussein is among the architects of the International Criminal Court, which is authorized by the Rome Statute that entered into effect in 2002, and the charter of which lays out what war crimes and crimes against humanity are. Some 123 countries have signed it, giving it the force of law in much of the world.

Commenting on Paragraph 1, which forbids deliberately targeting noncombatants, the statute specifies, “(a) “Attack directed against any civilian population” means a course of conduct involving the multiple commission of acts referred to in paragraph 1 against any civilian population, pursuant to or in furtherance of a State or organizational policy to commit such attack…”

The ICC is only authorized to build cases against individuals, not against governments, and can only do so where the state to which those individuals belong is a signatory of the Rome Statute. The exception is where the UN Security Council forwards a case from a non-signatory country to the ICC, as it did in the case of Muammar al-Gaddafi of Libya. Most former officials tried by the ICC have been deposed African dictators, which has provoked criticism from global South critics.

Since Syria has not signed the Rome Statute and since Russia has a veto on the Security Council, the likelihood of Syrian or Russian officials ever being tried for war crimes committed in Syria is slim. It is not impossible, however, that at some point some criminal official could be arrested in a third country. At least they won’t be able to vacation with any sense of safety on Spain’s Costa del Sol.

Al-Hussein’s forceful warning, however, is important, since states must not be allowed with impunity to starve out civilians, bombard hospitals and kindergartens with reckless disregard for noncombatant life, or even target civilians as a war strategy. If the world won’t intervene to stop crimes against humanity, at the very least we should forcefully and publicly denounce them.

Al-Hussein has Swedish and Jordanian heritage and is a member of the Jordanian royal family.